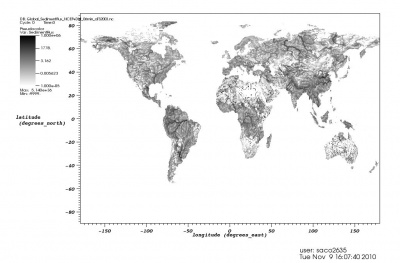 Output map of the BQARTwbm model

The Framework for Aquatic Modeling of Earth System (FrAMES) is a spatially and temporally explicit multi-scale (local through global) hydrological/biogeochemical modeling scheme. It is an ongoing interdisciplinary project allowing predictions of changing material flux from major continental rivers in response to changing environmental conditions. In this project we develop and test a new component within this framework, a spatially explicit sediment flux model. We expend the BQART sediment flux model from point (river outlet) to distributed (pixel) scale by integrating it into the WBMplus continental hydrology model. BQART is an analytical model describing the empirical relationship between basin geomorphic (area and relief), climatic (temperature and precipitation), geologic (lithology and ice cover) and human (reservoir and soil erosion) characteristics and short and long-term sediment flux (implemented in the HydroTrend model). WBMplus is a spatially explicit model describing varying components of global hydrological cycle.
The integrated model (BQARTwbm) allow daily predictions of global scale sediment fluxes at a spatial resolution of 30 and 6 minute.
Most of the new code development and testing was done on the CSDMS HPCC.

To date (Nov 2010) we produced a working sediment flux module for the FrAMES framework (the BQARTwbm model) which we are currently testing and will be validating soon.

This research is funded by NASA, through the Interdisciplinary Research in Earth Science Program, NNH062DA001N-IDS

This would be the place to provide links that are related to your project.

Retrieved from "https://csdms.colorado.edu/csdms_wiki/index.php?title=HPCCprojects:The_BQARTwbm_distributed_sediment_flux_model&oldid=216489"
Category:
This page was last edited on 19 February 2018, at 16:17.
Privacy policy
About CSDMS
Disclaimers