HydroTrend is an ANSI-standard C numerical model that creates synthetic river discharge and sediment load time series as a function of climate trends and basin morphology and has been used to study the sediment flux to a basin for basin filling models. As a drainage basin simulator, the model provides time series of daily discharge hydraulics at a river mouth, including the sediment load properties. HydroTrend was designed to provide input to lake or shelf circulation and sedimentation models (Steckler et al., 1996; Syvitski and Alcott, 1995b), and study the impact of land-sea fluxes given climatic change scenarios (Moore, 1992; Syvitski and Andrews, 1994). HydroTrend simulates the major processes that occur in a river basin, including:

HydroTrend, an ANSI-standard C coded program has been developed over many years by a number of researchers. The program started out with the name "RIVER" and was coded in FORTRAN. Over the years, it's capabilities have been built upon and greatly expanded up to RIVER version 5.11. The model development of RIVER and HydroTrend has been under the direction of by James Syvitski. Here is a small overview of all the primairy authors:

There are 2 input files required to run the model: HYDRO.IN and HYDRO0.HYPS. You can use an optional input file (HYDRO.CLIMATE) to specify daily precipitation and temperature events if you do not want to use the climate generator build in to HydroTrend. Each file has it's own format which are discussed below together with an explanation of each of the input parameters.

Explanation table for HYDRO.IN input file. Download this example HYDRO.IN file In case you want to set up a HydroTrend run for your specific river drainage basin.

The HYDRO0.HYPS file is an ASCII file that provides the model with a hypsometry curve, describing the area - relief relation of the studied river basin. HydroTrend determines the freezing and the snow line based on this information. Under conditions of changing sea level the basin hypsometry curve might be altered as well. In that case you want to run multiple epochs that each have a different hypsometry file. Therefore a number is added in the file name. For example if the simulation contains 2 epochs you need 2 hypsometry files named HYDRO0.HYPS and HYDRO1.HYPS.

This is the format of the file in case you want to create a HYDRO0.HYPS from scratch:

were the first 5 lines are the header followed by the number of hypsometric bins (in this case 3), followed by 3 lines containing altitude and the cumulative area at that elevation, starting close to sea level (between 0 - 50m). The elevation increases should go in steps not larger than 50m, and each elevation step should be increasing with the same elevation. Also, the cumulative area always has to increase!

The separation of elevation and cumulative area could be several spaces or just a tab. Notice that the starting elevation as well as the basin area at that point should be always positive. So for sea level change studies that affect the drainage basin, make sure that the sea level is your base level (so always start the hypsometric bins with 0 - 50 m of elevation and than the highest point of the basin will change.

You can download the following HYDRO0.HYPS example file and alter it for your river drainage basin. Hypsometric curves can be created with any GIS software. However, RiverTools is very straight forward to use for this.

The HYDRO.CLIMATE file is an optional ASCII file that can be used to simulate fluvial water discharge and sediment load for a specific climate event. The file needs to contain climate data (temperature and precipitation) for at least 1 year (the shortest simulation time for HydroTrend). Climate statistics from the HYDRO.IN file will be used when there is no HYDRO.CLIMATE file in the input directory.

This is the format of the file in case you want to create a HYDRO.CLIMATE from scratch:

You can download an example HYDRO.CLIMATE file an modify it for your river drainage basin. CSDMS might have some good climate source suggestions in case you are searching for climate data for your river basin.

General ASCII output files
A summary table of information is output to HYDRO.LOG. Mean annual and total annual values of many model parameters (discharge, load, basin temperature, precipitation, etc.) are written to a set of annual trend files (HYDRO.TRN1, HYDRO.TRN2, and HYDRO.TRN3). These annual trend files are useful for verifying climate ranges and trends and to check total discharge and sediment load. HYDRO.STAT is representing the used water and sediment equations and their statistics per epoch.

Optional ASCII output files
It's possible, to write all the output data to ASCII files. This option can be turned 'ON' or 'OFF' in the HYDRO.IN file. Notice that ASCII files are larger than binary output.
When the ASCII option is turned 'ON' the following files will be created:

There are 2 binary output files, named HYDRO.DIS and HYDRO.CONVDIS. Both files contain the same data, which is a minimum of 6 columns all seporated by space. From one to 6 or more: it contains velocity, width, depth, Qb, Cs[i](number of columns is equal to the number of grainsizes specified in the input file) and Total Cs. All values are defined as floats. Matlab can handle the format. The binary file are platform dependant. A swapped version of the output file is created for other platforms: HYDRO.CONVDIS file (this is the swabbed version of HYDRO.DIS). 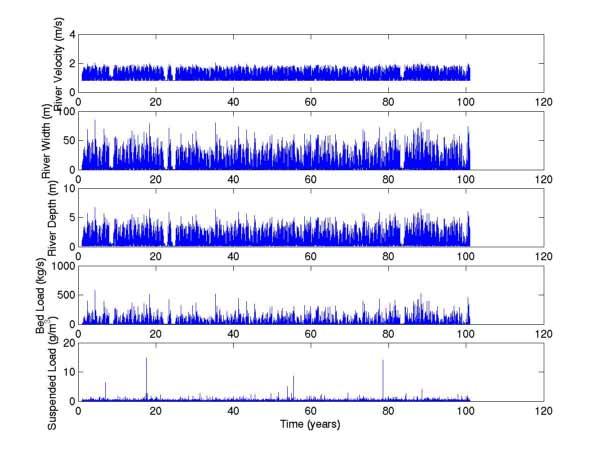 Retrieved from "https://csdms.colorado.edu/csdms_wiki/index.php?title=Model:HydroTrend&oldid=417685"
Categories:
This page was last edited on 19 April 2022, at 08:40.
Privacy policy
About CSDMS
Disclaimers