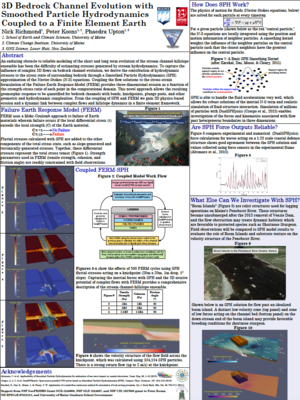 An enduring obstacle to reliable modeling of the short and long term evolution of the stream channel-hillslope ensemble has been the difficulty of estimating stresses generated by stream hydrodynamics. To capture the influence of complex 3D flows on bedrock channel evolution, we derive the contribution of hydrodynamic stresses to the stress state of surrounding bedrock through a Smoothed Particle Hydrodynamics (SPH) approximation of the Navier-Stokes (N-S) equations. The GPU-accelerated SPH solution locally integrates the N-S equations by discretizing the flow into millions of particles which communicate local motions to neighbor particles using a smoothing kernel. Coupling the flow solutions to the stress-strain formulation of the Failure Earth Response Model (FERM) provides three-dimensional erosion as a function of the strength-stress ratio of each point in the computational domain. This novel approach allows the resulting geomorphic response to be quantified for bedrock channels with bends, knickpoints, plunge pools, and other geometric and hydrodynamic complexities. Strength parameters used in FERM (tensile strength, cohesion, and friction angle) are readily constrained with field observations. Fluvial stresses calculated with SPH are added to the other components of the total stress state, such as slope-generated and tectonically-generated stresses. From the coupling of SPH and FERM we gain 3D physics-based erosion and a dynamic link between complex flows and hillslope dynamics in a finite element framework. Initial results indicate that the inertial forces generated by a simple 45° bend in a bedrock channel exceed the shear forces by a factor of two or more. Capturing these inertial forces and their 3D erosive potential provides a more complete understanding of the stream channel-hillslope ensemble.

Retrieved from "https://csdms.colorado.edu/csdms_wiki/index.php?title=Annualmeeting:2017_CSDMS_meeting-006&oldid=207147"
Category:
This page was last edited on 2 June 2017, at 07:31.
Privacy policy
About CSDMS
Disclaimers