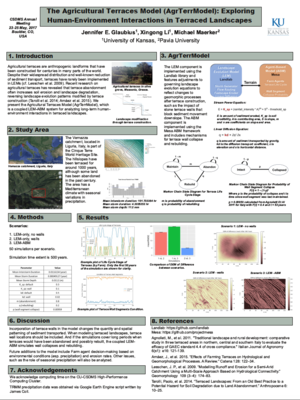 Integration of humans within landscape evolution models (LEM) as responsive actors in complex human-environmental systems, is still in its infancy. LEMs that included human decision-making have done so either entirely within an agent-based model (ABM) (e.g., CYBEROSION (Wainwright 2008)) or by coupling an ABM with a LEM (e.g., MedLanD (Barton et al. 2012)). These LEM-ABM examples have analyzed the effects of land use and tillage decisions on landscape evolution, but other ways in which humans interact with geomorphic systems have yet to be explored. Our research expands human-environment interaction modeling to landscapes modified by agricultural terraces to explore the long-term geomorphic evolution in these regions.

Agricultural terraces are anthropogenic landforms that have been constructed for centuries in many parts of the world. Despite their widespread distribution and well-known reduction of sediment transport, terraces have rarely been included within LEMs (cf. Lesschen, Schoorl, and Cammeraat 2009). Recent research on agricultural terraces has revealed that terrace abandonment often increases soil erosion and landscape degradation, reversing landscape evolution patterns modified by terrace construction (Tarolli, Preti, and Romano 2014/6; Arnáez et al. 2015/5). We present the Agricultural Terraces Model (AgrTerrModel), which is a coupled LEM-ABM system for analyzing long-term human-environment interactions in terraced landscapes. The LEM component is implemented using the Landlab library and features adjustments to governing landscape evolution equations to reflect changes to geomorphic processes after terrace construction, such as the impact of stone terrace walls that block sediment movement downslope. The ABM component is implemented using the Mesa ABM framework and includes mechanisms for terrace wall collapse and maintenance, as well as agents who determine cultivation and maintenance practices for terraced land. Using the AgrTerrModel, we simulate landscape evolution in Vernazza, Liguria, Italy near Cinque Terre to analyze how the timing and amount of terrace wall maintenance affects sediment transport. The interaction between seasonal precipitation and the timing of terrace wall maintenance is of special interest due to the Mediterranean climate of the study area. This project provides new insights into the evolution of terraced landscapes and an avenue for further research into the complexity of human-environment systems.

Retrieved from "https://csdms.colorado.edu/csdms_wiki/index.php?title=Annualmeeting:2017_CSDMS_meeting-005&oldid=207138"
Category:
This page was last edited on 2 June 2017, at 07:28.
Privacy policy
About CSDMS
Disclaimers