Coupled process-based numerical models have the potential to greatly enhance our understanding of the drivers of coastal change by allowing for detailed simulations of the processes involved within each model core of the coupling. However, producing accurate hindcasts and forecasts with these coupled frameworks can be challenging due to a wide array of parameters that interact nonlinearly across and within the individual model cores and the potentially substantial computational cost that limits both the number and duration of simulations that can be reasonably performed. Additionally, many model parameters (e.g., wave asymmetry and skewness or sediment transport coefficients) that are critical for model calibration are unitless coefficients in the model formulations and thus cannot be readily measured in the field. Here, we use Windsurf, a coupled beach-dune modeling system that includes Aeolis, the Coastal Dune Model, and XBeach, paired with two surrogate neural network models, to produce a pair of hindcasts and forecasts to replicate observed modes of dune and beach morphological change on a developed barrier island on the US Atlantic coast (Bogue Banks, North Carolina). The first neural network aids in the calibration process by allowing for the prediction of Windsurf’s error surface over thousands of potential parameterizations to rapidly identify a potential best calibration before actually running the model. Windsurf is then run within a genetic algorithm to further hone the collection model parameter settings. Once Windsurf is finished running, we use the output to train a second neural network which contains a Long Short-Term Memory (LSTM) layer to produce five-year forecasts of dune crest height and dune toe elevation. We test our results by comparing them to observed data collected in the field between 2016-2020 using Real-Time Kinematic Global Positioning System (RTK-GPS) and find our forecasts (from the hindcasts) produce reasonably accurate predictions of dune morphology change at interannual scale. 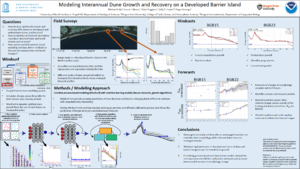