The efficiency of fluvial sediment and particulate organic carbon (POC) burial in river deltas strongly depends on their depositional environment, which can range from protected incised valleys to exposed active margins. Here, we hypothesize that the formation and infilling of incised valleys from Holocene sea-level rise led to increases in fluvial sediment burial efficiency, and, consequently, POC burial. To test this, we developed a new incised valley fill model that estimates incised valley volume and fill rates. We apply this model to all river deltas globally (n~11,000), some of which are filled already but many are still infilling since Holocene sea-level rise slowed ~6ka BP. The rate of incised valley infilling is determined based on global model estimates of fluvial sediment and POC supply. We use our model to explore the magnitude of POC burial during the Holocene, including its potential for global climate regulation. 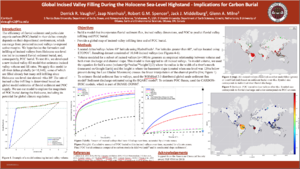