Plume simulates hypopycnal plumes generated by a river draining its suspended sediment load into a receiving basin. Satellite images of any river-delta emphasize the importance of river plumes. A plume’s behavior is dependent on the density contrast between the river water and the standing water (Albertson, 1950; Bates, 1953). Ocean water has a high density, and the plumes often flow buoyantly on the surface (hypopycnal). Another complementary model that deals with more rare hyperpycnal flows is Sakura. The river’s sediment concentration adds density to the freshwater, but usually the effluent remains below the density of seawater. The shape that a hypopycnal plume will have, depends on a variety of factors:

The plume equations follow those of Albertson (1950) developed for a jet flowing into a steady receiving basin. Plumes of similar shape but differing concentrations result for each grain size in the model. Fine sand will generally settle rapidly, whereas clay can travel much larger distances. Naturally, this affects the geometry of the deposited sediments on the basin floor. 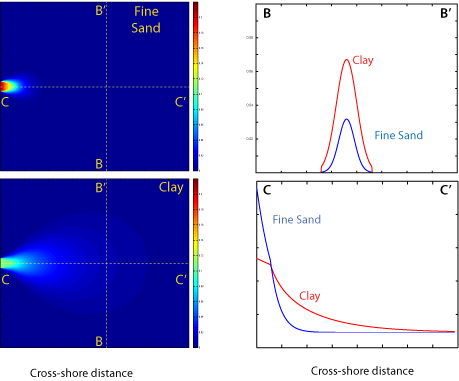 River dimensions, i.e. the channel width, depth and velocity at the river mouth are input conditions. In addition, river sediment concentration and settling velocities for specific grain size classes are input parameters as well. Plume is a steady-state model, meaning that it simulates constant input conditions, representative of a 'unit' event.

River dimensions for plume range over orders of magnitude, small streams of only a few meters wide have been run, as well as large continental scale rivers (for example the Ganges-Brahmaputra). Consequently, the spatial resolution of the grid is highly variable depending on the modeling objective. If plume is used in stand-alone mode, it runs events of a single day. If you are interested in exploring deposits of changing plumes over time you will need to use the PLUME model within the framework of the stratigraphic model Sedflux. 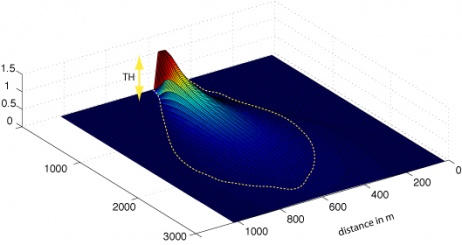 Half of the model grid is land, the other half is the receiving marine or lake basin as shown in the accompanying figure. The sedimentation rate for the first specified grainsize is listed for every gridcell. The small plume in the example is visible in the middle of the grid.

Then the grid repeats itself for the next grainsize, of which the plume has a different shape and sedimentation rate. So a grid of 2000m basin width and length, with gridcells of 10 by 10 m will have 400 rows by 200 columns, if the simulation was only run for two grain size classes.

This would repeat on to match the total number of simulated grain size classes. 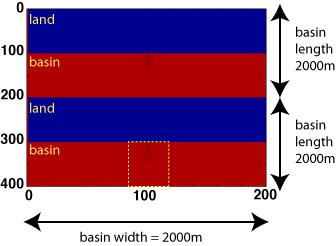 If you want to use PLUME output with Matlab you will have to cut off the header lines of the file in a text editor. These are just a couple of commands to get started with analyzing the output.

In Matlab use the following commands:

To create a planview map the plumes:

Usually the first grain size is the coarser fraction traveling in suspension, but it is dependent on your input file. If you just want to create a planview map of a single grainsize plume:

It may be usefull to compare X-sections for the different grain size classes:

A very simple scenario for the plume model has been posted here. It models a bankfull flood event for a small meandering river, draining into a lake. These files may be useful for testing whether the model is running.

The associated output file, with grids of sedimentation rates per day, for both grain sizes can be found here:

Retrieved from "https://csdms.colorado.edu/csdms_wiki/index.php?title=Model:Plume&oldid=299811"
Categories:
This page was last edited on 16 September 2020, at 19:15.
Privacy policy
About CSDMS
Disclaimers