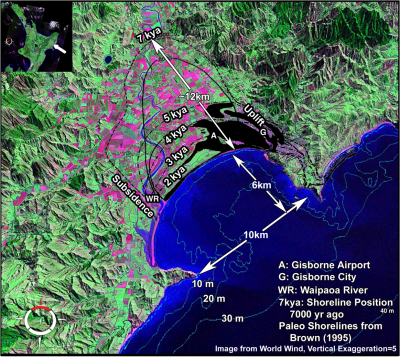 Figure is a satellite image of Poverty Bay and the Waipaoa River flood plain with the paleo shoreline locations from Brown (1995) overlain on the image. Text highlights the position of the shoreline through time and the regions of tectonic uplift and subsidence.[1]

Poverty Bay is located on the eastern coast of the North Island of New Zealand, and is situated between the terrestrial and marine portions of the Waipaoa River Sedimentary Dispersal System. Poverty Bay acts as an important transition zone, where any riverine signals are potentially modified before reaching the continental shelf. The Poverty Bay shoreline has been prograding at an ever decreasing rate for the last 7 kya, implying that some sediment is sequestered within the bay. This project aims to better understand the transfer of sediment from the mouth of the Waipaoa River through Poverty Bay onto the continental shelf. To this aim, hydrodynamic and sediment-transport observations were collected within the nearshore of Poverty Bay and are used along with coupled hydrodynamic and wave numerical models that extend to the shelf break to better understand the routing of sediment through Poverty Bay on a daily to seasonal time-scale. Also, multiple Poverty Bay geometries are modeled to investigate how changing the geometry of the dispersal basin affects the oceanographic energy available to cause marine dispersal, and how any changes to marine dispersal effect the amount of sediment sequestered within Poverty Bay or any changes to the characteristics of the sediment supplied to the continental shelf.

This project was started with collection of the field data in 2006 and is in the final stages of preparing the results for publication.

The ROMS and SWAN models are run concurrently using two-way coupling to get estimates of the hydrodynamics, sediment-transport, and waves. The Wiberg and Smith model is used to estimate the wave and current combined seabed shear stress from the field observations. Citations are provided below for the models.

We have found that Poverty Bay is important in modifying the sedimentary signal (grain-size distribution, geochemical signature, etc) discharged by the Waipaoa River before it reaches the continental shelf. The modification of the signals is caused by repeated episodes of sediment deposition followed by wave resuspension and reworking. Also, the changing shape of the dispersal basin (Poverty Bay) through time has lead to varying degrees of sediment preservation within the bay due to modifications to the dispersal of the Waipaoa River sediment. Model results estimate an overall coarsening of the sediment supplied to the continental shelf from 7 kya to the present day.

Two visualizations are available; one highlighting the hydrodynamics and sediment-transport during a period of elevated discharge and the other showing a Southern Ocean resupension event. Note to viewers: These files are relatively large.

Aaron Bever, at the Virginia Institute of Marine Science (VIMS) is the user of the CSDMS HPCC for this project.

Other authors on this work are:

Funding was provided for this work by NSF through the MARGINS Source-to-Sink initiative.

The observational work has been accepted as:

The modeling work, including comparison to the above data, is in prep for publication, and has been presented at the below meetings.

Retrieved from "https://csdms.colorado.edu/csdms_wiki/index.php?title=HPCCprojects:Hydrodynamics_and_Sediment-Transport_in_the_Poverty_Bay_Portion_of_the_Waipaoa_Sedimentary_System&oldid=216514"
Category:
This page was last edited on 19 February 2018, at 16:18.
Privacy policy
About CSDMS
Disclaimers