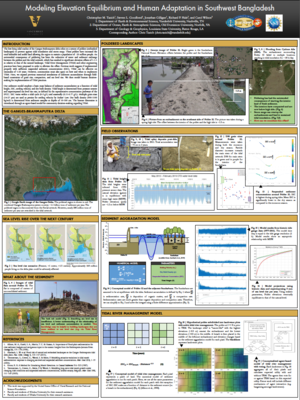 The low-lying tidal reaches of the Ganges-Brahmaputra delta relies on a system of polders (embanked landscapes) to prevent against tidal inundation and storm surge. These polders have increased the total habitable and arable land allowing the region to sustain a population of ~20 million people. An unintended consequence of poldering has been the reduction of water and sediment exchange between the polders and the tidal network, which has resulted in significant elevation offsets of 1-1.5 m relative to that of the natural landscape. Tidal River Management (TRM) and other engineering practices have been proposed in order to alleviate the offset. Previous work suggests if implemented properly with sufficient suspended sediment concentrations (SSC), TRM can be effective on timescales of 5-20 years. However, communities must also agree on how and when to implement TRM. Here, we expand previous numerical simulations of sediment accumulation through field-based constraints of grain size, compaction, and sea level rise. We then model human decision-making for implementation of TRM practices.

Our sediment model employs a basic mass balance of sediment accumulation as a function of tidal height, SSC, settling velocity, and dry bulk density. Tidal height is determined from pressure sensors and superimposed sea level rise rate, as defined by the representative concentration pathways of the IPCC. SSC varies within a tidal cycle (0-3 g/L) and seasonally (0.15-0.77 g/L). Multiple grain sizes (14-27 µm) are used as proxies for settling velocity by Stokes’ Law. Dry bulk density (900-1500 kg/m3) is determined from sediment samples at depths of 50-100 cm. The human dimension is introduced through an agent-based model for community decision-making regarding TRM.

Retrieved from "https://csdms.colorado.edu/csdms_wiki/index.php?title=Annualmeeting:2017_CSDMS_meeting-106&oldid=210401"
Category:
This page was last edited on 8 June 2017, at 13:20.
Privacy policy
About CSDMS
Disclaimers