Numerical investigation of the role of slope and flow dynamic characteristics on the “fill-and-spill” process and deposit in linked submarine intraslope minibasins. 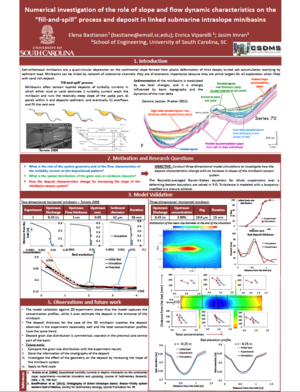 Salt and shale based minibasins are quasi-circular depression connected by submarine canyons of economic importance because they are prime locations of hydrocarbon reservoirs. The history of sedimentation of the minibasins is modulated by sea level changes, and it is strongly influenced by basin topography and continental shelf dynamics. Sedimentation in intraslope minibasins is generally described in terms of the “fill-and-spill” model in which the turbidity currents enter a minibasin and are reflected on the minibasin flanks. After the reflection, the turbidity currents pond and deposit the suspended sediment. As the minibasin fills, the current spill over the lowermost point of the minibasin flanks and reaches the next minibasin downslope, where the fill and spill process starts again. In this stage, deposition still occurs in the upslope minibasin with the formation of channel-levee complexes. In the last two decades field, laboratory and numerical studies focused on the description of (1) the large-scale stratigraphic architecture and evolution of the minibasins and (2) the behavior of the turbidity currents in the minibasin-canyon system. This notwithstanding, questions regarding the spatial distribution of the grain sizes in minibasin deposits, the role of the system geometry and of the flow characteristics of the turbidity current on the depositional pattern still need to be answered. The objective of the present study is to investigate with three-dimensional model simulations how the deposit characteristics change for increasing in slopes of the minibasin-canyon system. In particular, we are using a three-dimensional numerical model of turbidity currents that solves the Reynolds-averaged Navier–Stokes equations for dilute suspensions. Turbulence is modeled with a buoyancy-modified k–ε closure. The numerical model has a deforming bottom boundary to model the changes in elevation and grain size characteristics of the bed deposit associated with sediment erosion and deposition. Here we present the model validation against 1) 2D laboratory experiments of a horizontal minibasin in a constant width flume, and 2) 3D laboratory experiments on two linked minibasins. The model validation is performed comparing measured and simulated deposit geometries, vertical profiles of suspended sediment concentration and spatial distributions of sediment sizes in the deposit. In the near future, we will perform laboratory scale simulations by changing the slope of the experimental minibasin, i.e. the difference in elevation between the entrance and the exit points to study how the depositional pattern changes when the relative size of the ponded accommodation space, i.e. the space at a lower elevation than the spill point, and the perched accommodation space, i.e. the space under an ideal line connecting the spill point and the minibasin entrance.

Retrieved from "https://csdms.colorado.edu/csdms_wiki/index.php?title=Annualmeeting:2017_CSDMS_meeting-080&oldid=207156"
Category:
This page was last edited on 2 June 2017, at 08:17.
Privacy policy
About CSDMS
Disclaimers