(Un)sustainability of Deltas Under Potential Future Changes in Sediment Delivery 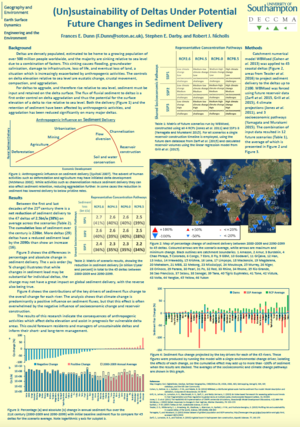 Delta environments, on which over half a billion people live worldwide, are sustained by sediment delivery. Factors such as subsidence and sea level rise cause deltas to sink relative to sea level if adequate sediment is not delivered to and retained on their surfaces, resulting in flooding, land degradation and loss, which endangers anthropogenic activities and populations. The future of fluvial sediment fluxes, a key mechanism for sediment delivery to deltas, is uncertain due to complex environmental changes which are predicted to occur during the coming decades. Fluvial sediment fluxes under environmental changes were investigated to assess the global sustainability of delta environments under potential future scenarios up to 2100. Climate change, reservoir construction, and population and GDP (as proxies for other anthropogenic influences) change datasets were used to drive the catchment numerical model WBMsed, which was used to investigate the effects of these environmental changes on fluvial sediment delivery. This method produced fluvial sediment fluxes under 12 scenarios of climate and socioeconomic change which are used to assess the future sustainability of 47 deltas, although the approach can be applied to deltas, rivers, and coastal systems worldwide. The results suggest that fluvial sediment delivery to most deltas will decrease throughout the 21st century, primarily due to anthropogenic activities. These deltas will likely become unsustainable environments, if they are not already, unless catchment management plans are drastically altered.

Retrieved from "https://csdms.colorado.edu/csdms_wiki/index.php?title=Annualmeeting:2017_CSDMS_meeting-063&oldid=207068"
Category:
This page was last edited on 1 June 2017, at 10:22.
Privacy policy
About CSDMS
Disclaimers