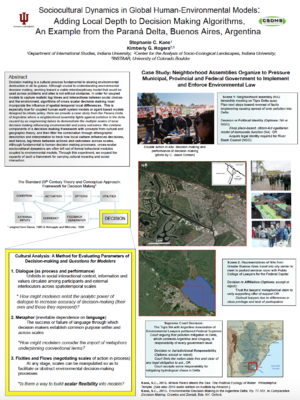 Decision making is a cultural process fundamental to slowing environmental destruction in all its guises. Although crucial to understanding environmental decision making, working toward a viable interdisciplinary model that could be used across problems and sites is not without obstacles. In order for coupled models to capture realistic lag times and interactions between social choices and the environment, algorithms of decision making must incorporate the influence of spatial-temporal local differences. This is especially true for coupled human-earth system models or agent-based models designed to inform policy. Here we provide a case study from the Paraná Delta of Argentina where a neighborhood assembly fights against pollution in the delta caused by an engineering failure. We combine components of a decision making framework with concepts from cultural and geographic theory, and then filter the combination through ethnographic description and interpretation to track how local culture influences decisions, and hence, lag times between actions and outcomes. Although fundamental to human decision making processes, sociocultural dynamics are often left out of formal behavioral modules coupled to environmental models. Through this experiment, we expand the capacity of such a framework for carrying cultural meaning and social interaction.

Retrieved from "https://csdms.colorado.edu/csdms_wiki/index.php?title=Annualmeeting:2017_CSDMS_meeting-060&oldid=210076"
Category:
This page was last edited on 6 June 2017, at 16:51.
Privacy policy
About CSDMS
Disclaimers