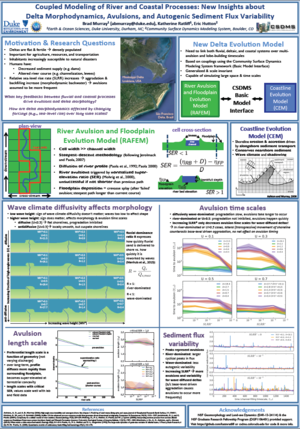 Following pioneering modeling work examining the evolution of wave-influenced deltas (Ashton et al., 2013; Nienhuis et al., 2013), we coupled the River and Floodplain Evolution Model (RAFEM) to the Coastline Evolution Model (CEM). Results of a recent suite of model experiments (conducted using the CSDMS software stack and Dakota) lead to new insights: 1) The preferred location of avulsions (a distance from the river mouth scaling with the backwater length), previously observed in laboratory models and in the field, can arise for geometric reasons that are independent of those recently suggested (Chatanantavet et al., 2012; Ganti et al., 2016). This alternative explanation applies when the river longitudinal profile tends to diffuse more rapidly than the floodplain longitudinal profile. 2) Although the timescale for avulsions is expected to increase with increasing wave influence (Swenson, 2005), we find that this depends on the angular wave distribution. When wave influence is strong and the angular mix of wave influences tends to smooth a nearly straight coastline (coastline diffusion), progradation is slowed and avulsions delayed. However if the angular wave distribution produces anti-diffusive coastline evolution, a strong wave influence still leads to cuspate delta shapes, but avulsions are barely delayed. 3) Although increasing sea-level-rise rate is expected to cause more rapid avulsions, and does in laboratory deltas, we unexpectedly find that this is not true for river-dominated deltas in our model (or for anti-diffusive wave climates). The explanation, involving the role of sea-level-rise related transgression (or decreased progradation), raises potentially important questions about geometrical differences between laboratory deltas and natural deltas. 4) The magnitude and timescale of autogenic variability in sediment delivery rates at the river mouth depends on wave climate, sea-level-rise rate (for some wave climates), and on the amount of super elevation of the river channel (relative to the surrounding floodplain) required to trigger avulsions.

Retrieved from "https://csdms.colorado.edu/csdms_wiki/index.php?title=Annualmeeting:2017_CSDMS_meeting-054&oldid=212157"
Category:
This page was last edited on 13 June 2017, at 07:18.
Privacy policy
About CSDMS
Disclaimers