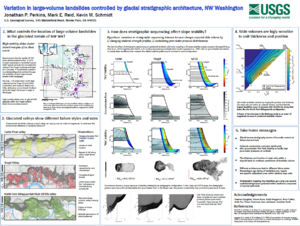 Topography, material properties, and gravitationally driven groundwater flow together act to control hillslope stability. Although it is well known that material strength and hydraulic conductivity differences can alter slope stability via feedbacks with groundwater, comparatively little is understood about the role of stratigraphic sequencing in governing how hillslopes fail. In northwest Washington State, the recent occurrence of the large-volume, high-mobility SR-530 landslide brought focus to hazards associated with large terraces of glacial sediment that inundate the valleys of the western Cascades. However, observations from high-resolution LiDAR topographic data show significant differences between terraces in adjacent valleys, and both geologic and subsurface data show that each site has a unique stratigraphic configuration. Here we hypothesize that variations in the bed thickness and sequencing of glacial sediment packages within ice-marginal terraces control landslide volume and failure style. Using a three-dimensional limit-equilibrium model, Scoops3D, we show that the variable distribution of silts, clays, sands, and tills have a first-order control on both the volume and location of failures along a terrace. Predicted landslide volumes vary by over an order of magnitude between different stratigraphic configurations. Variably saturated groundwater flow simulations show that hydraulic conductivity contrasts between glacial units lead to perched water tables with localized zones of high pore fluid pressure, and in most cases (but not all) the failure pattern set by stratigraphy is amplified by the presence of groundwater flow. Model results from a range of synthetic stratigraphic configurations show that a twofold increase in the thickness of glaciolacustrine clays produces a tenfold increase in predicted landslide volume, consistent with topographic observations. Knowledge of subsurface stratigraphy may therefore help toward quantitative assessment of deep-seated landslide potential in sedimentary landforms.

Retrieved from "https://csdms.colorado.edu/csdms_wiki/index.php?title=Annualmeeting:2017_CSDMS_meeting-047&oldid=207135"
Category:
This page was last edited on 2 June 2017, at 08:27.
Privacy policy
About CSDMS
Disclaimers