Long-term morphodynamics of muddy backbarrier basins: Fill in or Empty out? 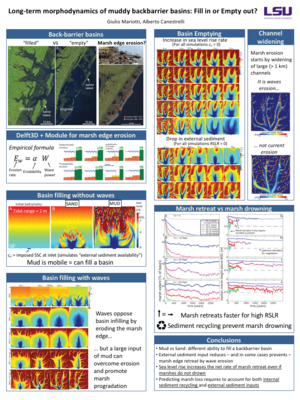 The long-term (3000 years) morphodynamics of backbarrier tidal basins is studied using a shallow-water hydrodynamic and wind-wave model (Deltf3D-FLOW-WAVE), modified to include fully-coupled marsh organogenic accretion, biostabilization, drag increase, and wave-induced marsh edge erosion. The latter process is implemented with a novel probabilistic algorithm. In simulations run with only sand, a flood tidal delta forms adjacent to the inlet, but marshes do not establish. In simulations run with only mud, instead, marshes establish at the basin margins and prograde seaward. If enough mud is supplied to the basin from the shelf, marsh progradation counteracts edge erosion. Marsh progradation does not completely fill the basin, but leaves open a few km-wide channels, large enough for waves to resuspend sediment. Starting from a basin (almost) filled with marshes, a drop in the external mud supply or an increase in the rate of relative sea level rise cause the basin to empty out by marsh edge erosion, while the marsh platform, aided by reworking of the sediment released by marsh retreat and mudflat deepening, keeps pace even with fast rates (10 mm/yr) of relative sea level rise. Even if the marsh does not drown, the marsh retreats faster if the rate of sea level rise increases, because more sediment is sequestered to fill the newly created accommodation space and is thus not available for marsh progradation. This study suggests that prediction of marsh erosion requires a basin-scale sediment budget, and that edge erosion, not platform drowning, is likely to dominate marsh loss.

Retrieved from "https://csdms.colorado.edu/csdms_wiki/index.php?title=Annualmeeting:2017_CSDMS_meeting-041&oldid=209879"
Category:
This page was last edited on 4 June 2017, at 11:09.
Privacy policy
About CSDMS
Disclaimers