Links between the human dimension and long term tectonics 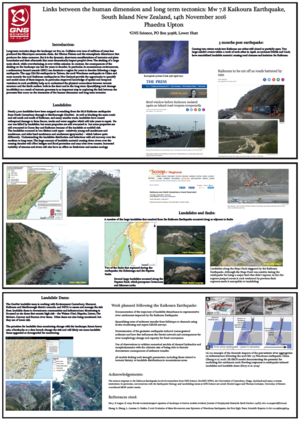 Long-term tectonics shape the landscape we live on. Collision over 10s of millions of years has produced the Himalayan mountain chain, the Tibetan Plateau and the atmospheric disturbance that produces the Asian monsoon. But it is the dynamic, short-term manifestations of tectonics and plate boundaries and their aftermath that most dramatically impact people’s lives. The shaking of a large main shock, while overwhelming, is over within minutes but the consequences of the shaking on the landscape can last for years to decades. In particular, in mountainous environments, a sedimentary hazard cascade (SHC) can dominate a region in the decades following a large earthquake. The 1999 Chi-Chi earthquake in Taiwan, the 2008 Wenchuan earthquake in China and most recently the 2016 Kaikioura earthquake in New Zealand provide the opportunity to quantify and model some of these impacts. In particular, improved knowledge of spatial and temporal variations in rock erodibility help us to understand the physical connections between tectonic structure and the Earth surface, both in the short and in the long term. Quantifying rock damage (erodibility) as a result of tectonic processes is an important step in exploring the link between the processes that occur on the timescales of the human dimension and long term tectonics.

Retrieved from "https://csdms.colorado.edu/csdms_wiki/index.php?title=Annualmeeting:2017_CSDMS_meeting-020&oldid=207121"
Category:
This page was last edited on 1 June 2017, at 14:46.
Privacy policy
About CSDMS
Disclaimers