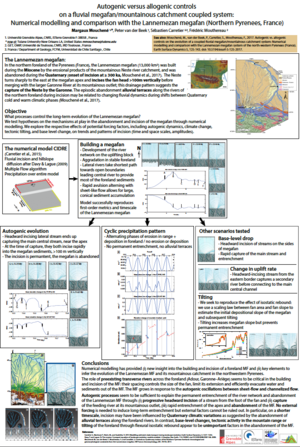 Alluvial megafans are sensitive recorders of landscape evolution: the influence of both autogenic processes and allogenic forcing and of the coupled dynamics of the fan with its mountainous catchment can often be deciphered from the megafan sediment record and the system’s morphometric characteristics. The Lannemezan megafan in the northern Pyrenean foreland was abandoned by its mountainous feeder stream during the Quaternary and subsequently incised. During the incision, a flight of alluvial terraces was left along the stream network. We use numerical models (CIDRE model, Carretier et al. 2015) to explore the relative roles of autogenic processes and external forcing in the building, abandonment and incision of a foreland megafan. We then compare the results with the inferred evolution of the Lannemezan megafan. We conclude that autogenic processes are sufficient to explain the building of a megafan and the long-term entrenchment of its feeding river at the time and space scales that match the Lannemezan setting. In the case of the Lannemezan megafan, climate, through temporal variations in precipitation rate, may have played a second-order role in the pattern of incision at a shorter time-scale. In contrast, base-level changes, tectonic activity in the mountain range or tilting of the foreland through flexural isostatic rebound do not appear to have played a role in the abandonment of the Lannemezan megafan.

Retrieved from "https://csdms.colorado.edu/csdms_wiki/index.php?title=Annualmeeting:2017_CSDMS_meeting-015&oldid=207077"
Category:
This page was last edited on 1 June 2017, at 10:24.
Privacy policy
About CSDMS
Disclaimers