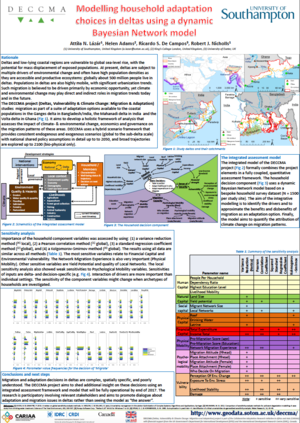 Deltas are threatened not only by climate and environmental changes (sea level rise, soil salinization, water shortages and erosion), but also by socioeconomic factors (high population density, intensive land use). These processes threaten people’s livelihoods and wellbeing, and as a result, there is a growing concern that significant environmental change induced migration might occur from deltaic areas. Migration, however, is already happening for economic, education and other reasons (e.g. livelihood change, marriage, planned relocation, etc.). Migration has multiple, interlinked drivers and depending on the perspective, can be considered as a positive or negative phenomenon.

The DECCMA project (Deltas, Vulnerability & Climate Change: Migration & Adaptation) studies migration as part of a suite of adaptation options available to the coastal populations in the Ganges delta in Bangladesh, the Mahanadi delta in India and the Volta delta in Ghana. It aims to develop a holistic framework of analysis that assesses the impact of climate and environmental change, economics and governance on the migration patterns of these areas. The project will test plausible future scenarios and evaluate them by considering a range of perspectives. The dynamic Bayesian Network integrated model of the DECCMA project formally brings together the project elements in fully coupled, quantitative assessment framework. The presentation introduces the overall integration concept and describes the household decision-making component in detail. This component is based on a detailed household survey from delta migrant sending and receiving areas. We describe the model structure, and contrast the model setup and sensitivities across the three study areas. In doing so we illustrate some key causal relationships between changes in the environment, livelihoods and migration decision. The outputs of the integrative modelling is used to objectively evaluate the simulated environmental, social and economic changes for decision makers including the benefits and disadvantages of migration as an adaptation option.

Retrieved from "https://csdms.colorado.edu/csdms_wiki/index.php?title=Annualmeeting:2017_CSDMS_meeting-012&oldid=209918"
Category:
This page was last edited on 6 June 2017, at 06:25.
Privacy policy
About CSDMS
Disclaimers