Along wave-influenced deltas, wave-driven longshore currents usually interact with the fluvial jet at the river mouth, creating a sharp gradient alongshore in sediment transport/deposition and hence a corresponding change in coastline morphology. When multiple channels intersect a delta coastline, morphological changes can take on a complex outlook driven by the multiplicity of the river channels and their ‘hydraulic groyne effect’, whereby the overall effect of the river jets is to limit the loss of sediment within the coastal littoral system and ensure shoreline stability. This study explores the dynamic relationships between waves and fluvial discharge along a coastline intersected by river mouths by employing a numerical model of an idealized delta coastline containing two river mouths. The modelling is undertaken using Delft3D, in order to simulate both sediment transport and wave propagation along with the accompanying changes in coastline morphology. Analysis focuses on the relative change in coastline morphology, updrift, and downdrift of the river channels, in relation to varying scenarios of the incident wave climate, fluvial input, and river channel geometry. Specifically, water discharge entering the basin is set temporally constant during a model run but is varied in the range of 500 - 2000 m3/s between runs. Further, 3 scenarios of fluvial sediment discharge corresponding to low, medium, and high sediment discharges, are incorporated into each fluvial discharge scenario. Finally, waves approach the coastline from an incident angle of <45o, generating longshore sediment transport proportional to its significant height and approach angle, which are varied between model runs in the ranges of 1.0 - 1.5 m and 15 - 42 degrees, respectively. The study is set to provide new insights into the morphodynamics of wave-influenced deltas resulting from the interaction of waves with fluvial discharges at interannual timescales. 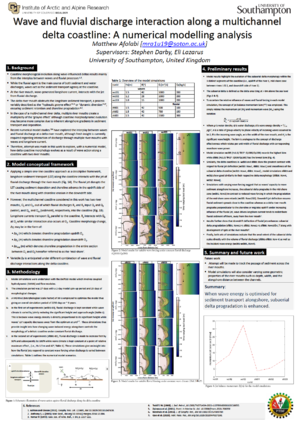