The active volcano Ol Doinyo Lengai is located in the magma-rich southern Eastern Branch of the East African Rift and erupts unique low-temperature carbonatites. Between 2007 and 2010, the volcano had several explosions and erupted with ash falls, and lava flows (VEI 3) that caused damage to the nearby communities. Although this volcano has been studied for decades, its plumbing system is still poorly understood, in part, because of the lack of precise observations of surface deformation during periods of quiet and unrest. This study investigates the volcanic plumbing system of Ol Doinyo Lengai and surroundings using data from the permanent Global Navigation Satellite System (GNSS) network monitoring the volcano called TZVOLCANO and Interferometric Synthetic Aperture Radar (InSAR) observations. We calculate velocities for 6 continuously operating GNSS sites distributed around Ol Doinyo Lengai for a timespan between 2016 and 2021 and also process InSAR data for nearly the same time-period to constrain surface motions. We then use the GNSS deformation signals and InSAR observations to solve for magma sources embedded in a homogeneous and elastic half space using the USGS inversion code dMODELS. Both GNSS and InSAR inversion results quantify a deflating spherical geometry source at a depth of ~1.3 km with a volume change ∆V of -0.05 ± 0.01x106m3 located east of Ol Doinyo Lengai and southwest of the dormant volcano Gelai. InSAR inversions alone also suggest a closing dike model at a depth of ~9 km similar to the location resolved for the 2007 Ol Doinyo Lengai dike. This work suggests a shallow magma reservoir exists east of Ol Doinyo Lengai and that the 2007 dike is actively contracting. This magma source influences the onset, size, duration and hazard of eruptions of the volcano, and plays a significant role in triggering slip on border faults during early phases of continental rifting through stress transfer. 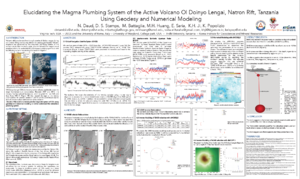