Megacities and Climate Change: An environmental implication of Urbanization on Ten Megacities in different climatic regions.

Globally, more people are impacted by floods than all other forms of natural disasters combined. In global megacities, defined by the United Nations as cities with a population of over ten million, increased human exposure to flooding is both ubiquitous and extremely difficult to characterize. Over the past three decades, most of these cities have experienced a gradual or very rapid growth as the global population continues to urbanize. As both urban expansion and global climate change contribute to hydrologic intensification, and as globally more people live in urban areas than rural ones, the need to assess both the drivers and magnitude of flood risk associated with rapid growth in megacities is of critical humanitarian concern. Through a multitemporal analysis (2000, 2010, and 2020) of urban growth modes and urban landscape change detection using the Landsat dataset (ETM+, OLI), we estimate the growth rates and development patterns in ten global megacities (Guangzhou, Tokyo, Lagos, Jakarta, Delhi, Manila, Mumbai, Seoul, Mexico City, New York) representing different global climate zones using machine learning. Trends in runoff magnitudes over the time period are quantified and associated with urban expansion and non-stationarity in regional historical precipitation patterns. Preliminary results showed that the ten cities have experienced major flooding within the last ten years resulting mostly as a result of heavy rainfall. 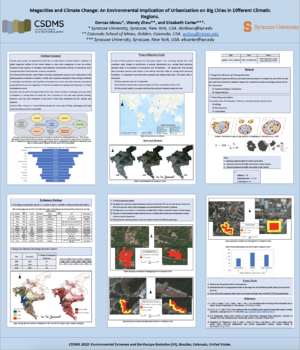