Eroding coasts make up the majority of the coastlines on Earth, including the west coast of the United States, and host critical infrastructure like roads, railways, and residential structures. The precarious siting of infrastructure is particularly true for Del Mar, California, where a major railway between Los Angeles and San Diego sits within just a few meters of a cliff edge that is closely backed by dense housing subdivisions. Coastal cliff retreat presents a danger to these communities that is potentially amplified under rising sea level conditions, among other factors, yet constraints on retreat rates are most often limited to those derived from historical imagn ery and maps dating back 10-100 years. These modern retreat rates are then used, in conjunction with multi-model ensembles, for forecasting cliff retreat over the next 50-100 years in order to gauge future impacts to coastal communities. Managers and policymakers make decisions for mitigation efforts based on these results, however they may not capture the full picture of cliff retreat, and the factors that influence it, over time. While nearly all of the existing forecasting models explicitly account for projected sea level rise, the majority of them ignore other factors (e.g. subtidal and subaerial weathering) that may also play a large role. A recently developed combination of in situ-produced cosmogenic 10Be surface exposure dating in conjunction with a new numerical model of shore platform profile development that takes into account sea level rise, intertidal weathering, and wave attack on cliff retreat provides quantification of cliff retreat histories over hundreds to thousands of years via cliff-normal 10Be sample transects. Here, we use a shore-perpendicular transect of cosmogenic 10Be concentrations from the surface of a sandy claystone shore platform exposed along a narrow and sandy beach backed by a near vertical ~20-meter-tall cliff in Del Mar, California to present a long-term cliff retreat rate of 5.5 - 8 cm a-1 over the last two millennia for this site. This is the first long term cliff retreat rate for any coast in North America determined by this new methodology. Existing decadal retreat rates at and proximal to this site range from 5-20 cm a-1, suggesting that cliff retreat here may be accelerating towards the present. Preliminary modeling results suggest that uplift-corrected sea level rise in Southern California, which remained constant during the late Holocene (0.8 mm a-1) but doubled in the last century, cannot alone explain this potential increase, as modeled platform geometries and associated development rates show a dependence on the imposed weathering rate as well as wave erosion efficacy. Recent investigation into the relative influence of weathering and wave attack on observed cliff retreat at this same location also shows a roughly equal contribution for both drivers. We further explore this and other potential drivers (e.g. land use change) for this potential increase, and speculate on the implications of these results for future cliff retreat forecasting efforts. 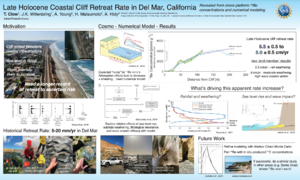