Throughout the world’s oceans, there are hundreds of coral atolls. These structures provide valuable habitats to plants and wildlife, and the islands on them are home to hundreds of thousands globally. Atoll islands, known as motu, are geologically quite young; they form relatively quickly, over hundreds or thousands of years. While there has been significant work in studying the effect of ocean waves on coastal morphologies, there is little such work specifically focusing on coral atolls and the motu upon them. In this study, we examine the morphologies and morphometrics of over 80 atolls in the Indian and Pacific oceans and quantify the morphometrics of the reef flats and motu with direction-based binning. We gathered recent ocean wave data from over 600 locations around these atolls using NOAA’s Wave Watch III simulations and quantified the local wave climate for each of our atolls. After analyzing these two separate datasets, we compared the effect of local wave climate on atoll morphology. In our analysis, we have found regional trends in wave climate, specifically we have observed directional differences in wave size prevalence between the wet and dry seasons. We have also noted possible relationships between reef width and wave height and between motu width and the 50 year wave height. As we continue to investigate these data, these findings will allow us to better understand the processes driving motu evolution and may be used to infer potential morphological changes in the presence of changing wave climates. 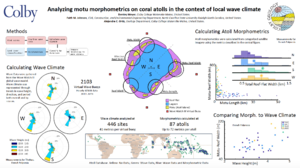