The Marlborough Fault System (MFS) consists of four main dextral strike-slip faults which link subduction with oblique continental collision in central New Zealand. It is a zone where crustal transfer from one plate to another is occuring, where a subduction interface is developing within a previously intact plate and which varies along and across strike. We use a variety of tools including topographic fabric, river evolution, thermochronology and geological history to understand the deformation that is occurring across the MFS. We show that the eastern and western ends of these faults have had completely different evolutions through time. These apparently continuous strike-slip faults have coalised into through going structures quite recently. The signature of these processes can be found in the landscape. 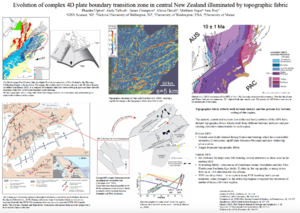