Coastal erosion and wetland loss are affecting Louisiana to such an extent that the loss of land between 1932 and 2016 was close to 5,000 km2. To mitigate this decline, coastal protection and restoration projects are being planned and implemented by the State of Louisiana, United States. The Louisiana Coastal Master Plan (CMP) is an adaptive management approach that provides a suite of projects that are predicted to build or maintain land and protect coastal communities. Restoring the coast with this 50-year large-scale restoration and risk reduction plan has the potential to change the biomass and distribution of economically and ecologically important fisheries species in this region. However, not restoring the coast may have negative impacts on these species due to the loss of habitat. This research uses an ecosystem model to evaluate the effects of plan implementation versus a future without action (FWOA) on the biomass and distribution of fisheries species in the estuaries over 50 years of model simulations. By simulating effects using a spatially-explicit ecosystem model, not only can the changes in biomass in response to plan implementation be evaluated, but also the distribution of species in response to the planned restoration and risk reduction projects. Simulations are performed under two relative sea level rise (SLR) scenarios to understand the effects of climate change on project performance and subsequent fisheries species biomass and distribution. Simulation output of eight economically important fisheries species shows that the plan mostly results in increases in species biomass, but that the outcomes are species-specific and basin-specific. The SLR scenario highly affects the amount of wetland habitat maintained after 50 years (with higher levels of wetland loss under increased SLR) and, subsequently, the biomass of species depending on that habitat. Species distribution results can be used to identify expected changes for specific species on a regional basis. By making this type of information available to resource managers, precautionary measures of ecosystem management and adaptation can be implemented. 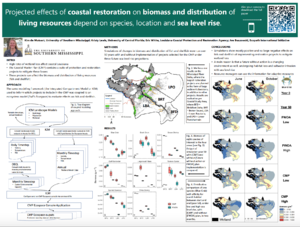