Our understanding of temporal changes in long term regional erosion rates in hundreds of years resolution is currently limited. The existing published research is either restricted in spatial coverage, the time frame is in millions of years, or the erosion rate through time is considered constant. We strive to fill this gap by mapping the regional erosion at a resolution of 3.70° latitude by 3.75° longitude (approximately 412 km x 416 km at the equator) at 500-year resolution for the past 21 ka for all land areas. We employ a transfer function that relates mean annual air temperature (MAAT) with erosion that is derived from published field observations recorded during recent times and transferred through the past 21 ka by using space-for-time substitution with paleo-temperature data from TraCE-21ka, a global climate model. Averaging erosion rates and MAAT by latitudes of the Kӧppen climate zones, a non-linear relationship was established. Among the many findings, the largest variation in erosion rates through time is found in cold regions, such as higher elevations and the Arctic. Furthermore, tropical or sub-tropical regions show minimal variation in erosion through time. 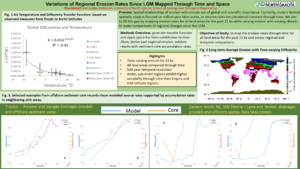