Predicting arsenic contamination in groundwater wells in the Bengal Basin 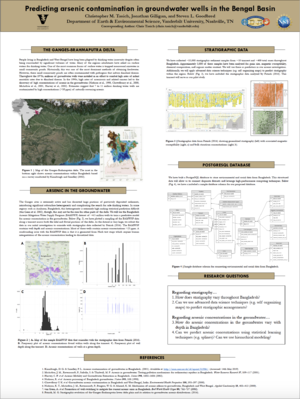 Inhabitants of Bangladesh and West Bengal rely significantly on groundwater for drinking water. Estimates suggest that 7 to 11 million drinking water wells are contaminated by high concentrations of naturally occurring arsenic. The arsenic likely derives from the pyrite-rich sediment of the Ganges basin, however, the cause and timing of mobilization of the arsenic have been difficult to determine. Generally, shallow and deep aquifers contain low concentrations of arsenic, while mid-depth aquifers (20 to 100 m) are often contaminated. The Ganges river is extremely active and has dissected large portions of previously deposited sediments, introducing significant subsurface heterogeneity and complicating the search for safe drinking water. Here, we have aggregated a variety of datasets into a PostgreSQL database, which we use to build predictive models of arsenic concentration in groundwater. We use the Bangladesh Arsenic Mitigation Water Supply Project (BAMWSP) dataset of ~4.5 million wells to train our models. The predictors for our models are largely based on ~15,000 stratigraphic sediment samples from ~10 transect and ~400 total cores. Approximately 5,000 of these samples have been analyzed for grain size, magnetic susceptibility, chemical composition, and organic matter content. We use elevation and population density as additional predictors. With this database, we will create a regional statistical model that may lead to better prediction of arsenic contaminated wells. By compiling and analyzing these data, we hope to improve water security in this rapidly developing region.