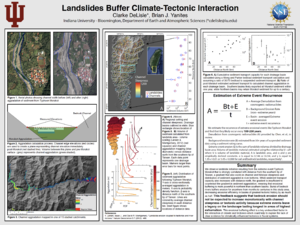 Climatically controlled surface processes redistribute mass and modulate solid-Earth stress fields, potentially driving changes in tectonics. Examples of climatically-influenced tectonics exist in glaciated orogens, however this phenomenon has not been well documented in fluvial systems. Here we describe a previously undiscussed feedback between hillslope and fluvial processes that buffers climate-tectonic interactions, helping to explain the dearth of observations of climatically influenced tectonics in fluvial systems. Using remote sensing and field investigation, we quantify production, deposition, and transport of landslide sediments resulting from the 2009 Typhoon Morakot in Southern Taiwan, which delivered record-breaking rainfall triggering more than 22,000 landslides across 7800km^2. An annual landslide catalog facilitates use of area-volume scaling to estimate amount of landslide material distributed across a strong northward gradient in tectonic uplift in Southern Taiwan. Landslide volume and frequency exhibit similarly positive trends with distance from the southern tip of the orogen. Exploiting a wealth of publicly available imagery and elevation data, we map sediment aggradation throughout fifteen drainage basins and observe 10’s of meters of aggradation with the distribution tightly coupled to areas of greatest exhumation. Sediment transport modeling across the orogen suggests that areas of highest exhumation will be inundated with sediment over three orders of magnitude longer than less exhumed basins. Estimating the frequency of events like Typhoon Morakot, we expect the most active basins in the study area to have their channels buried by landslide sediment for up to 50% of any given time period, while less active basins will be able to incise nearly 100% of the same time period. This feedback suggests that as landscapes become more exhumed, the erosional buffering effects of extreme storms and earthquakes that cause widespread landslides are amplified, driving a negative feedback between climate driven surface processes and tectonics in fluvial systems.