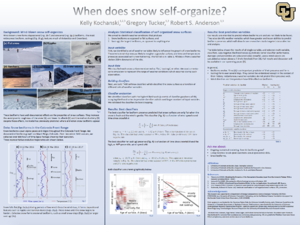 Wind-swept snow self-organizes into bedforms. These bedforms affect local and global energy fluxes, but have not been incorporated into Earth system models because the conditions governing their development are not well understood. We created statistical classifiers, drawn from 736 hours of time-lapse footage in the Colorado Front Range, that predict bedform presence as a function of windspeed and time since snowfall. These classifiers provide the first quantitative predictions of bedform and sastrugi presence in varying weather conditions.
The flat snow surfaces we saw were all short-lived. The probability that a surface remained flat, rather than bedform-covered, decreased with time and with the average shear stress exerted on the surface by the wind.
The most persistent snow features were an erosional bedform known as sastrugi. The likelihood that a surface was covered by sastrugi increased with time and with the highest wind speeds experienced by the surface.
These results identify the weather variables which have the strongest effect on snow surfaces. We expect that these variables will inform and feature in future process-based models of bedform growth. Our observations therefore represent a first step towards understanding a self-organized process that ornaments 8% of the surface of the Earth.