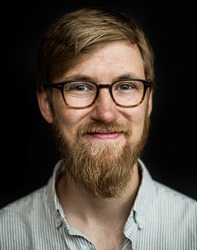 Anders Damsgaard received the 2016 Student Modeler Award for his submission, “Grain-scale Numerical Modeling of Granular Mechanics and Fluid Dynamics and Applications in a Glacial Context”, which models glacier flow over a soft sediment beds from the single grain scale. Bed deformation plays a major role in this process and the novel model was applied to provide insights on the precise interaction of sediment grains and fluids under pressure at the glacier bed. A discrete element method was used to simulate the granular phase on a per-grain basis and the model treats pore water as a compressible Newtonian fluid. The model is in Python and is open-source code. Findings from a set of model simulations show that the extremely low viscosity of water means that deformational of dense granular material, like subglacial till, is governed by inter-grain mechanics. The porosity of the sediment packing evolves towards a critical-state value with increasing shear strain. Changes in porosity cause deviations from the hydrostatic pressure if the rate of porosity change exceeds the rate of pressure diffusion, which is impacted by both the local porosity and permeability. The built-up to a critical state, and subsequent temporal changes in sediment strength may explain observed variability in glacier movement. Ph.D., 2015, Aarhus University. Advisor: David Lundbek Egholm, Aarhus University