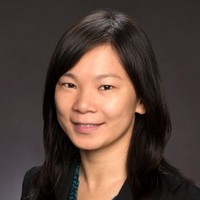 Man Liang received the 2011 Student Modeler Award for her research titled: “A Reduced-Complexity Channel-Resolving Model for Delta Formation”. Liang developed a new model for delta formation, capable of simulating delta channel bifurcation and channel avulsion. The model has probabilistic rules for routing sediment and water packages with a ‘random-walk’ algorithm. The unique aspect of Liang’s model is that one of the rules to drive the probability for the ‘random-walk’ is a simplified version of the shallow water equations. This model design allows a direct hydrodynamic feedback upon an otherwise rule-based model. Liang comments: 'There may be limited physics presented by these simple rules, but the model is designed to be flexible and each building block can be 'upgraded' individually'. Early model simulations show delta channels freely migrating over a delta plain. Several channels are active at the same time and one distributary channel can slowly evolve to be dominant over time. Comparisons of basic geometry metrics and the roughness of the shoreline generated by the model and the fractal properties of the channel networks compare remarkably well to the young, real-world Mossy delta, which is part of the Saskatchewan delta complex. PhD 2013, University of Minnesota. Advisors: Vaughan Voller and Chris Paola, University of Minnesota