Abstract: A small river confluence in Illinois with an asymmetrical confluence and a concordant bed. The different cross-sections in the example focus on mixing of rivers with different water temperatures (thermal mixing). The large-scale engulfing by the ML eddies promotes mixing. The large-scale oscillations of SOV cells play an important role in the mixing between the two streams. 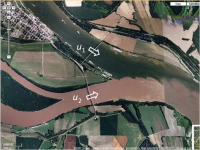