Debris Flow in the Andes

Statement: Debris flow originating from the steep valley walls of the Cajon del Maipo, in the Chilean Andes

Abstract: This movie features a debris flow originating from the steep valley walls of the Cajon del Maipo, in the Chilean Andes. The highest peaks surrounding this area are over 6000m, the slopes where the flow originated are upto ~3000m. The local slopes are steep, loose and sparsely vegetated. This is a tectonically active area and faults and folds are abundant. There is a lot of talus and loose debris sediment available, due to the young age of the Andes Mountain Range. The movie first shows an overview of the debris flow source slope.The biggest flow occurred early during the event. It shows boulders moving in a viscous mudflow. It appears the boulders are lifted of the bed. The estimated velocity of the flow was 2 m/s. The large flow built small levees and Small side channels transport few cm-thick flow of viscous mud following existing topographic depressions. Eventually the flow reaches the main river channel running through the Cajon de Maipo. 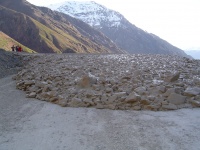 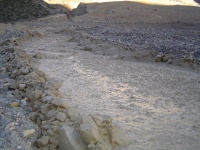 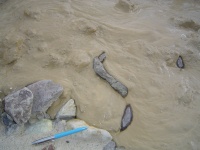 A debris flow is a fast moving mass of unconsolidated, saturated debris that looks like flowing concrete. They differentiate from a mudflow by terms of the viscosity of the flow. Flows follow a steepest descent generally, although they are known the “climb” opposite valley walls in extreme cases. The front of the debris flow, or the toe, forms a lobe, marking flow front. This lobe often contains a great deal of the larger sediments including cobbles and boulders. Early pulses or previous debris flows form levees that channel the flow until they are breached. The presence of older levees indicates the recurrence and characteristics of debris flows in a particular area. This can be an important indicator of past debris flow activity for developing land on alluvial fan terrace surfaces. But, flows can carry clasts ranging in size from clay particles to boulders, and may contain woody debris. During later phases of the event, more viscous mud that contains sands, silts, and fines runs through the flowpath. Debris flows can be triggered by large amounts of rainfall, snow melt, or glacial/permafrost melt, or a combination of all. Speed of debris flows can vary from 0.5 m/s to 16 m/s in extreme conditions. Variables in the conditions that affect debris flow characteristics are slope, available sediment and vegetation in the flowpath. Debris flow are extremely destructive to life and property.

This particular event happened on July 2nd, 2006. This is during the middle of the Southern Hemisphere's Austral Winter, but the temperature was unseasonally high at 32º C! It was the warmest July day ever recorded (pers. comm. W. Keller). This debris flow event is attributed to hydrothermal alteration of the local mountain flank and the melting of permafrost.