Abstract: Time-lapse series of coastal bluff erosion along the Arctic Coast at Drew Point, Beaufort Sea, Alaska. Coastal erosion rates exceeding 20 meters per year are being observed along the Arctic Coast, and they are especially high along Alaska’s Beaufort Sea coastline. Comparison of aerial photos and LANDSAT imagery suggest accelerating erosion rates over the last 50 years. Arctic sea ice coverage has been declining dramatically over the last few decades and record September minima were observed in 2007. These observations suggest a causal relationship between sea ice decline and coastal change. The timelapse movies presented here show that the relative roles of thermal and wave energy may be significant. The bluffs consist of silt and have high ice-content. The thawing of the ice-rich bluffs by relatively warm seawater undermines coastal bluffs, leading to topple failures of discrete blocks defined by ice-wedge polygons. The fine-grained nature of these materials does not function as a protective barrier for incoming waves, so there is not a strong negative feedback on erosion rates, so that coastal erosion rates in this setting are likely to increase with continued Arctic warming. 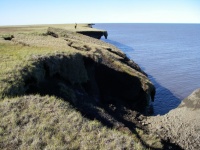 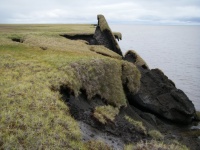