This lab has been designed and developed by Courtney Harris, Julia Moriarty, and Danielle Tarpley, Virginia Institute of Marine Sciences, Gloucester Point, VA
with assistance of Irina Overeem, CSDMS, University of Colorado, CO

Classroom organization
This is the second lab in a mini series to introduce a Web-Based version of the Regional Ocean Modeling System (ROMS) for inexperienced users. ROMS is a three-dimensional hydrodynamic ocean model (see Haidvogel et al. 2008; myroms.org). ROMS solves the conservation of mass and three-dimensional momentum equations and includes transport equations for temperature and salinity. The version implemented here also accounts for suspended sediment transport and deposition, following Warner et al. (2008). Here we present a basic configuration of ROMS in the framework of the Web Modeling Tool (WMT). This series of labs is designed for inexperienced modelers to gain some experience with running a numerical model, changing model inputs, and analyzing model output. The example provided looks at the influence of a river plume on the hydrodynamics and sediment transport within an idealized continental shelf.


If you have never used the Web Modeling Tool, learn how to use it here. The WMT allows you to set up simulations, but once you are ready to run them, you will need an account on the CSDMS supercomputer to successfully submit and run your job. More information on getting an account can be found here HPCC Access. Note that getting permission for access takes a few days after your request.


>> Open a new browser window and open the Web Modeling Tool here and select the ROMS project
>> This WMT project is unique in that there is only a single driver, ROMS-Lite. It is a pre-compiled instance of the larger ROMS system specially configured to the river plume case for teaching use. For this lab, you will need to visualize in Matlab, you can download a library here File:Riverplume mfiles.tar.gz.

Resuspension and Rouse Number
Sediment suspension depends on turbulent diffusion overpowering settling. The shear velocity of a flow provides a scale for the turbulent diffusion, and the shear velocity, u* , is defined as
u* = √(τb/ρ);
where τb is the bed shear stress, and ρ is the fluid density. For sediment to be suspended, the ratio of settling velocity over shear velocity must be low (less than about 1). This is often expressed as the Rouse Number, defined as
P = ws/( κ u* )
where κ is von Karman’s constant (κ= 0.408). Sediment can be suspended when P < 2.5. 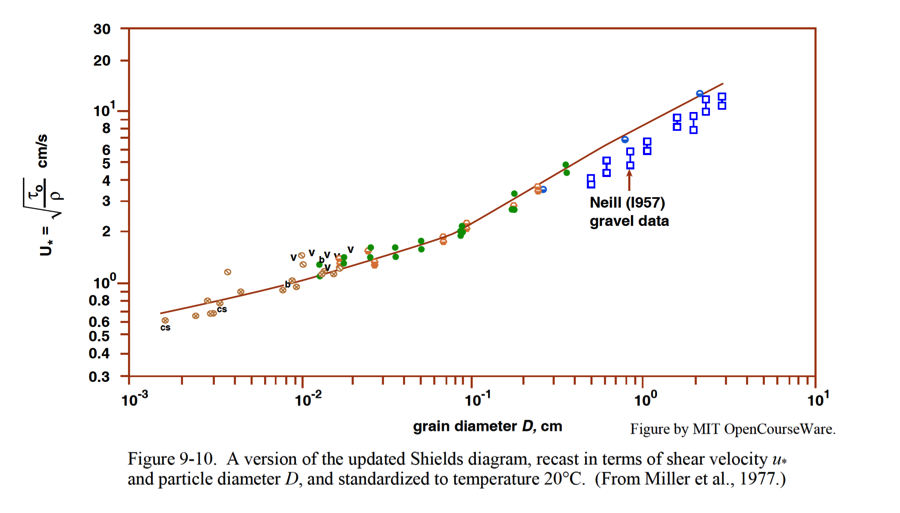