The Kudryavtsev et al. (1974), or Ku model, presents an approximate solution of the Stefan problem. The model provides a steady-state solution under the assumption of sinusoidal air temperature forcing. It considers snow, vegetation, and soil layers as thermal damping to variation of air temperature. The layer of soil is considered to be a homogeneous column with different thermal properties in the frozen and thawed states. The main outputs are annual maximum frozen/thaw depth and mean annual temperature at the top of permafrost (or at the base of the active layer). It can be applied over a wide variety of climatic conditions.

This lab is the second in a series of introduction to permafrost process modeling, designed for inexperienced users. In this second lesson, we explore the Kudryavstev model and learn to use this model in the CSDMS Python Modeling Tool (Pymt). We implemented the Kudryavstev model (as formulated in Anisimov et al.1997). It is dubbed the Ku-model.

This series of labs is designed for inexperienced modelers to gain some experience with running a numerical model, changing model inputs, and analyzing model output. Specifically, this lab looks at what controls soil temperature and active layer thickness and compares model output with observed longterm data collected at permafrost active layer thickness monitoring sites in Fairbanks and Barrow, Alaska.

This lab will likely take ~ 1,5 hours to complete in the classroom. This time assumes you now have gained some familiarity with the Pymt and have learned how to set parameters, save runs, download data and look at output. If this is not the case, either start with Lab 1 in this series, or learn how to use Pymt here. The Pymt allows you to set up simulations and run notebooks.

If you are a faculty at an academic institution, it is possible to work with us to get temporary teaching accounts. Work directly with us by emailing: csdms@colorado.edu

You can launch binder to directly run the Jupyter Notebook for this lab through a web browser. 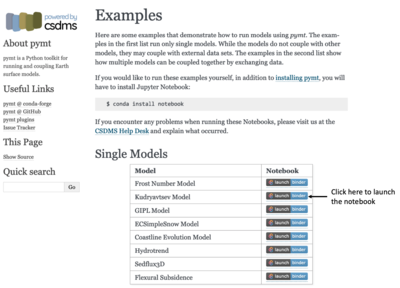 >> You will see that there are several example models. In this lab we will select the Kudryatsev model.
>> Click on the 'Launch Binder' box and it will allow you to see this lab as a Jupyter Notebook.
>> You can execute the Jupyter notebook code cells using shift -enter.

>>> We will run the Kudryatsev model for conditions in Barrow, Alaska in a very cold year, 1964. The mean annaul temperature for 1964 was -15.21C, the amplitude over that year was 18.51C. It was close to normal snow year, meaning the average snow thickness over this winter was 0.22m.

>>> Adapt the settings in the Ku model for Barrow 1964. Make sure you request an output file. Save the simulation settings and submit your simulation. Download the model results and open them in Panoply.

>> Run the Kudryatsev model with a range of snow conditions (0 m as the one extreme, and in extremely snowy years, the mean snow thickness over the winter is 0.4m in Barrow). Set these two simulations, run them and dowload the files.

>> Posted here are time-series for climate conditions for both Barrow and Fairbanks, Alaska. Time-series are annual values and run from 1961-2015, the data include mean annual temperature (MAAT), temperature amplitude (TAMP) and winter-average snow depth (SD).

>> Download the files here, it is a zip archive and contains all six files: File:ClimateData Alaska.zip
These are text files, so you can plot them in your own favorite software or programming language.

>> Choose which case you want to run, and you will now run a 55 year simulation.

The panel above shows modeled time series for active layer thickness for both Fairbanks and Barrow, and compares these time series with observed data. The Circumarctic Active Layer Network (CALM) makes this data available.

More on Model code and Running this model


Documentation for this model can be found Ku Model metadata in CSDMS repository.
If you'd like to run this code independently or contribute to it, find it in our repository: Permafrost Modeling Toolbox Codes