Once we have moved sediment and water over hillslopes and routed it through a river system, we can think about this flux of water and sediment draining into lakes or into the ocean. Typically the riverine freshwater and the suspended sediments will form a so-called hypopycnal sediment plume. We will use a component called PLUME to investigate the behavior of these sediment plumes. The model is largely based on turbulent jet theory presented by Albertson et al., (1950). In this lab we will look at the river plume characteristics and the depositional patterns for single plume events. To learn more about Plume and its approach you can download this presentation.

If you have never used CMT, learn how to use it here.
>> Open the CMT, Go to Projects, Courses, choose 2013.
>> Drag the PLUME component into the driver palette.
>> Specify a unique working directory for each experiment, for example: /CMT_Output/PLUME1
>> (…etc PLUME2 for the next experiment).

River Characteristics
In this lab we will focus on a specific braided river system in West-Greenland. The Watson River drains a small section of the Greenland Ice Sheet, it winds through a narrow braided river plain for about 20km and then drains into Kangerlussuaq Fjord. The photo shows the river braidplain in 2012, which was a peak discharge year in Greenland The waterdepths on the braidplain are typically not very deep (>1m with perhaps a smaller channel section that is deeper ~ 3m). 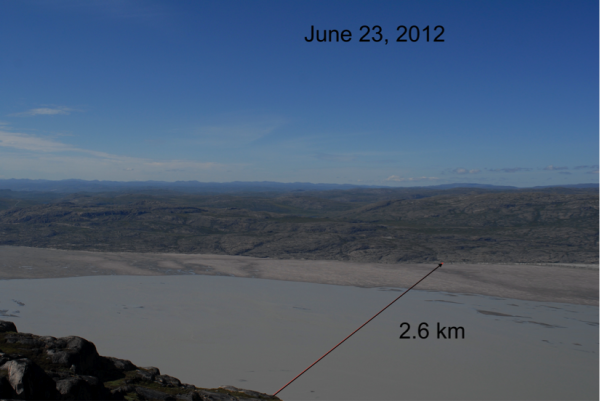 >> Set up two simulations of plume model for the different discharge events you have estimated. >> Keep each run at 10 days total simulation time, with each discharge event to last for 2 days and ask for an output grid for every 2 days.
>> Change the default basin geometry to be 4 km wide and 60km long to match the fjord dimensions of our case-study.
>> Make sure you switch the output file ON!
>> You can use the ‘flood’ tab in the plume model to configure your simulations for the selected river input parameters.
>> Download the generated depositional grid for visualization in VisIT: ‘model_grain_class_0__deposition_rate.nc’

PLUME is one of the key components of the marine sedimentation model SedFlux; river plumes are just one of the marine processes that control marine sedimentation. Other processes include waves and tides and turbidity currents and biological production. The stand-alone plume component runs for a single flood event, and it runs for a single suspended sediment load class only. You can imagine that in a more comprehensive framework the plume model runs for several grain-size classes and for a sequence of many different discharge events over time. We will look at the effect of changing the suspended grain-size in the river.
Empirically, sediment removal rates, λ, [1/T] for fine sediment in the plume model are defined as a function of grain-size, D:

This relationship was derived from time-lapse image analysis of underwater particle settling for grains between 2 micron and 42 micron. 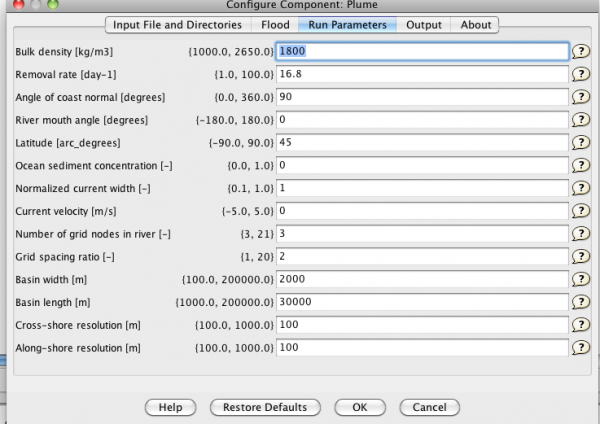 
Plumes in an ocean basin

>> Set up and run 2 simulations of PLUME with positive and negative ocean current velocities (1.5 m/s) for a wide 30 by 30 km basin. List your input parameters for the discharge event you are running.
>> Visualize and plot the output grid stacks in Visit.