Contributor(s)
Zoltan Sylvester at Bureau of Economic Geology, University of Texas at Austin.
Irina Overeem at University of Colorado.
Introduction 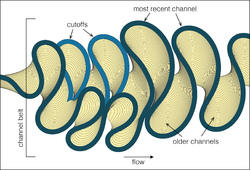 Meanderpy is a Python package that implements a simple numerical model of meandering, the one described by Howard & Knutson in their 1984 paper "Sufficient Conditions for River Meandering: A Simulation Approach". This is a kinematic model that is based on computing migration rate as the weighted sum of upstream curvatures; flow velocity does not enter the equation. Curvature is transformed into a 'nominal migration rate' through multiplication with a migration rate (or erodibility) constant; in the Howard and Knutson, 1984 paper this is a nonlinear relationship based on field observations that suggested a complex link between curvature and migration rate.

In the 'meanderpy' package we use this linear relationship between the nominal migration rate and curvature, as recent work using time-lapse satellite imagery suggests that high curvatures result in high migration rates (Sylvester et al., 2019).

You can read more about the model, find references at: https://csdms.colorado.edu/wiki/Model:Meanderpy.

There is a keynote lecture on the concepts behind this model that you can watch here: https://csdms.colorado.edu/wiki/Presenters-0433

Classroom organization
This is a self-contained jupyter notebook using meander py. It is recommended the instructor introduces concepts of meandering rivers, and students read papers on meadner migration rate - i.e. the papers directly associated with the model. Students can run through the examples, and then assignments can be worked on plenary in a lab style class or as homework. It is recommended that results are being discussed plenary after the completion of the exercises.

Notes are in the associated Jupyter Notebook.

This lab can be run on the lab (for educators) and jupyter (for general use) instances of the OpenEarthscape JupyterHub: just click one of the links under the Run online using heading at the top of this page, then run the notebook in the "CSDMS" kernel.

References
Retrieved from "https://csdms.colorado.edu/csdms_wiki/index.php?title=Lab-0013&oldid=417688"
Category:
This page was last edited on 19 April 2022, at 12:46.
Privacy policy
About CSDMS
Disclaimers