A Brief History of CSDMS 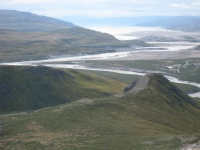 The CSDMS Project is an NSF-funded, international effort to develop a suite of modular numerical models able to simulate the evolution of landscapes and sedimentary basins, on time scales ranging from individual events to many millions of years. CSDMS is an acronym for Community Surface Dynamics Modeling System. Ideas behind the CSDMS concept were discussed by participants of an international workshop, Numerical Experiments in Stratigraphy (University of Kansas, May 15-17, 1996), with formal presentation of these findings at the third annual conference of the International Association of Mathematical Geology (Barcelona, 1997: Syvitski, et al, 1997). The formal CSDMS idea, however, took shape at a panel convened by the Geology/Paleontology Program of NSF in March 1999. That panel identified a CSDMS as a high priority NSF research initiative in sedimentary geology, and since then the concept has been widely discussed in the North American sediment-dynamics community.

The history behind CSDMS began in the mid-1960s, when Graeme Bonham-Carter coded up sediment transport equations related to a river's discharge into the ocean, to provide us with new insights into the formation of sedimentary deposits. The exercise was completed at a time when application of the Navier-Stokes equation to sediment transport remained in its infancy, and when we fed computer cards into memory-poor, slow-speed mainframes. In 1988, a large representation of this community met in the mountains of Colorado, and the concept of quantitative dynamic stratigraphy (QDS) was born. CSDMS has joined with other earth system modeling efforts, like the established Community Climate System Model or the Regional Ocean Modeling System, to coordinate the development of algorithms that mathematically describe the processes and conditions relevant to water, sediment and solute transport, and would incorporate all the important input and boundary conditions that define an environmental system.

More About the CSDMS Project

The Earth's surface itself is the cradle and the arena for its biological systems, from terrestrial alpine regions to the depths of the ocean. The physical, chemical, and biological systems of the Earth's surface are so deeply interwoven that the surface is a kind of "living skin" of our planet. Dramatic events like landslides can occur in seconds. Subtle but common forms of landscape change can control nutrient flow and population stability, especially in steep terrains. Over years to decades, changes in critical surface features like beaches and rivers can affect large areas and the populations that inhabit them.

CSDMS contributes to our understanding of the Earth surface by offering community-built and freely available suite of integrated, ever-improving software models and modules that predict the movement of fluids, and the flux of sediment and solutes in landscapes, seascapes and their sedimentary basins. CSDMS must nurtures, develops and maintains a high-level of community participation and enlist modelers who can benefit the entire earth surface modeling community.

Three proof-of-concept challenges are being addressed: 1) Predicting the transport and fate of fine sediment and carbon from source areas in the landscape to sedimentary basins that accumulate sediment over time; 2) Understanding the impact of humans on the natural cycle, through, for example, changes in waterways, forest fires, and agricultural practices; and 3) Tracking the evolution of landscapes and seascapes through the geological past, with focus on Pleistocene glacial cycles.