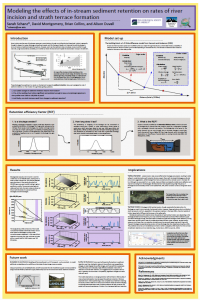 Fluxes in water discharge and sediment supply have long been known to influence river incision. However, recent studies in several Pacific Northwest rivers measured elevated incision rates over the past 100 years that correlate with the timing of wood loss - the historical deforestation and removal of in-channel wood. Increased bedrock exposure from the lowered sediment retention associated with wood may thus have an important and previously unexplored effect on rates of river incision. Field evidence in the form of geomorphic mapping and terrace ages supports the formation of a historical strath terrace triggered by deforestation, the loss of in-channel wood, and the associated lowered in-stream sediment storage. Reduced in-channel wood loads can also be triggered by climatic changes, disease, and wildfires in addition to anthropogenic deforestation, and so river incision rates are likely affected by changes to sediment retention over much longer time periods as well. We use a 1-D finite difference numerical model to test the influence of changes in sediment retention on river incision rates over 100,000s of years, and contrast it with the effects of changes to sediment supply and water discharge. The model simulates fluvial long profile development while recording valley width in such a way that terrace surface information can be extracted. Bedrock is eroded based on unit stream power as well as the probability of bedrock exposure, which is controlled by the scour depth through surface alluvium and the sediment retention. Spatial hotspots of high sediment retention represent log jams and decrease the probability of bedrock exposure to erosion, thus reducing incision rates and retarding strath terrace formation. Temporally, the degree of sediment retention is varied to reflect sudden losses such as produced by fire or deforestation which promote strath terrace formation. Our results expand on the role of wood, sediment, and water in controlling river incision rates and suggest landscape evolution, driven by stream incision, can be affected by the flux of in-stream wood. Future 2-D modeling using LandLab will be implemented to consider additional complexity in the system, utilizing existing LandLab components such as storm and wildfire generators, and more accurately representing valley widening within 2-D space.