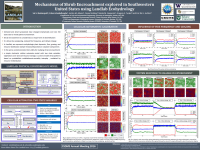 Arid and semi-arid grasslands of southwestern United States have changed dramatically over the last 150 years due to woody plant encroachment. Driven by overgrazing, reduced fire frequency, and climate change, shrub encroachment is considered as a major form of desertification. In Landlab we represent ecohydrologic plant dynamics, fires, grazing, and resource distribution (erosion/deposition) in separate components. In this work, we demonstrate their utility for studying shrub encroachment using three examples. In the first example, a simple stochastic cellular automata model with two state variables, vegetation cover and soil resource storage, are used to model shrub patterns based on probabilistic establishment-mortality interplay, mediated by resource redistribution, while explicit roles of climate were neglected. In the second example, physically based vegetation dynamics model is used to simulate biomass production based on local soil moisture and potential evapotranspiration driven by daily simulated weather, coupled with a cellular automata plant establishment. While climate is included as forcing, the model disregards resource redistribution, except for seed dispersal. In the third example, we coupled the latter two models to examine the roles of disturbances and resource distribution in a dynamic ecohydrologic context. Inferences are drawn on how encroachment factors and model complexity affect shrub pattern in space and time.