The quandary of an under-filled basin: Investigating the roles of local hydrology and incipient topography on channel path selection in Sylhet Basin, Bangladesh 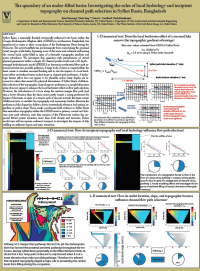 Sylhet Basin, a seasonally flooded, tectonically influenced sub-basin within the Ganges-Brahmaputra-Meghna delta (GMBD) in northeastern Bangladesh, has experienced as many as three occupations of the Brahmaputra River during the Holocene. The active braidbelt has predominantly been routed along the proximal (west) margin of the basin, bypassing most of the water and sediment and leaving the central basin under-filled in spite of a favorable topographic gradient and active subsidence. We investigate this quandary with perturbations of several physical parameters within a simple 1D channel profile model and a 2D depth-averaged hydrodynamic model (FREHD) to determine preferential flow path selection between two possible pathways. A large body of water is created within the basin center to simulate seasonal flooding and to test the impact of a local backwater effect and reduced water surface slope on channel path preference. A hydrologic barrier effect does not appear to be plausible unless water depths are increased to values that exceed the physical dimensions of Sylhet Basin. Additionally, reduction of the topographic slope along two pathways in a simple bifurcation setup does not appear to enhance the local backwater effect on flow path selection. However, the introduction of a levee along the western margin flow path (and thus a lower elevation) than the basin center path creates a strong preference for bypass of the basin, in spite of a steeper path of descent towards the basin center. Additional tests on variable fan topography and asymmetry further illustrate the preference of the channel to follow a lower (entrenched) elevation bed surface, regardless of surface slope. These results corroborate field evidence in Sylhet Basin that antecedent topography within the GBMD exerts a primary control on Holocene river path selection, such that incision of the Pleistocene surface has impacted fluvial system dynamics more than local climate and tectonics. Future model runs will incorporate sediment transport to investigate the impacts of lake infilling on sediment bypass and mass extraction.