Prediction of coastline retreat in Arboletes, southern Caribbean coast of Colombia, for a climate change scenario 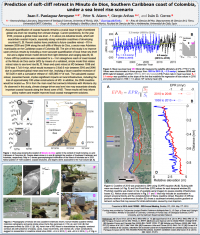 Accurate quantification of coastal hazards remains a crucial issue in the light of predicted future sea level rise due to climate change. Most drastic up-to-date predictions have proposed for 2100 a global mean sea level in ~1 m above pre-industrial levels. This may increase the likelihood of related coastal impacts, especially on vulnerable coastlines of developing countries. Along the soft-cliffs of Arboletes town, southern Caribbean coast of Colombia, recent research has quantified historical retreat rates and predicted future coastline positions for the climate change related acceleration in global mean sea level.

The aim of present study is to improve upon those results by including a more accurate quantification of local mean sea level rise and variations in top-cliff coastline elevations. Latter item allowed the calculation, under several assumptions, of the amount of sediment that would be released to the nearshore from cliff erosion. By using a validated model that relates the rates of retreat and sea-level rise, future positions were calculated for ~1 km of coastline located at the Minuto de Dios neighborhood (MD) of Arboletes town. Overall, mean end-point retreat at MD between 1938 and 2010 was 1.7±0.4 m/a, which would increase to 2.9±0.7 m/a between 2010 and 2046 due to the acceleration in global mean sea level rise. This may imply a future mean coastline recession distance of 104.4±25.2 m and a release of 720,000 m3 of rock.

Future coastline retreat of the order of magnitude herein presented could produce important impacts over local infrastructure, including the loss of around 100 socio-economically vulnerable urban constructions of MD. In addition, 2046 coastline may be located as close as 50 m from the main road that connects Arboletes town with Monteria city. To the knowledge of the authors, these predictions provide compelling evidence that climate change may exacerbate already important coastal hazards along the littoral of MD. Indeed, aforementioned results may inform policy makers and could eventually lead to coastal management solutions for this region.