Filtering the hydrograph through sediment transport and channel geometry 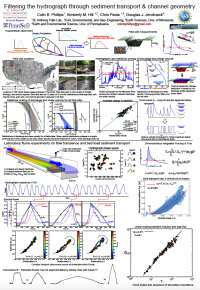 Spatial and temporal variations in rainfall are hypothesized to influence landscape evolution via their control on erosion and river sediment transport. Short hydrological records and limited empirical observations have led to exploring the relations between rainfall, climate and river erosion through numerical models. To this end, modeling the relationship between rainfall and river dynamics requires a greater understanding of the feedbacks between flooding and a river’s capacity to transport sediment. We investigate this with field and experimental data.

We analyzed channel geometry and stream-flow records from 186 coarse-grained rivers across the United States. We find that channels adjust their geometry such that floods slightly exceed the stress required to transport bed sediment – regardless of widely-varying climatic, tectonic, and lithologic controls. Remarkably, the distribution of fluid stresses associated with floods is consistent, indicating that self-organization of near-critical channels filters the climate signal evident in discharge. These findings suggest that a fixed-magnitude steady flood event with an intermittency factor may be adequate for modeling the influence of a variable hydrograph on sediment transport over long timescales.

In tandem, we explore the role of hydrograph unsteadiness on bed load sediment transport through laboratory flume experiments. We find that unsteady flows demonstrate an array of complex transport phenomena even under the conditions of a narrow unimodal grain size distribution and constant sediment supply. However, despite complex transport phenomena at instantaneous timescales within unsteady floods, the total amount of sediment transported per flood depends only on the total integrated excess stress (the flood impulse) and is independent of the flood’s shape. Under these experimental conditions, a steady flow may be substituted for a complicated hydrograph.

Reducing the role of climate to an intermittency factor and steady flow is at first glance an oversimplification, however these results suggest this recipe for modeling the impact of climate on river channels may be just simple enough. At the very least these results suggest that this approach could serve as the null hypothesis against which to test more complicated modeling strategies.