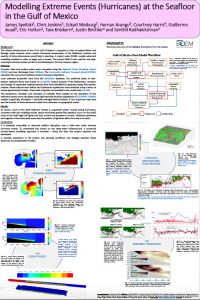 The subsea infrastructure of the US N Gulf of Mexico is exposed to risks of seabed flowage under extreme storm events. Numerical assessments of the likelihood, location and severity of those phenomena would help in planning. A project under BOEM, couples advanced modelling modules in order to begin such a system. The period 2008-10 was used for test data, covering hurricanes Gustav and Ike, in the Mississippi to De Soto Canyons region. Currents, tides and surface waves were computed using the Regional Ocean Modeling System (ROMS) and river discharges from WBMsed. The Community Sediment Transport Model (CSTMS) calculated the concurrent regional patterns of sediment erosion-transport-deposition. Local sediment properties were provided from the dbSEABED database. The preferred paths of near-bottom sediment flows were based on a TauDEM channel analysis of the bathymetry. Locations and timings of suspended sediment gravity flow were identified by applying energy flow ignition criterea. Wave-induced mass failure and subbottom liquefaction were also assessed using geotechnical models. These tests of ignition are bundled in the model suite HurriSlip. The persistence, densities and velocities of turbidity flows yielded by the disruption of the sediment masses were calculated using high-Reynolds Number adaptations of LES/RANS-TURBINS models (Large-Eddy Simulation / Reynolds Averaged Navier-Stokes). A very important step here was the transfer of these advanced models from laboratory to geographic scales. As known, much of the shelf sediment mantle is suspended and/or moved during hurricanes, consistent with the modeling results. Many short-lived gravity-flow ignitions occur on the shelf; many at the shelf edge will ignite into fast, erosive and persistent currents. Sediment patchiness and vagaries of hurricane path mean that the pattern of ignitions alters from event to event. To understand the impact on the deep-water infrastructure, numerical process-based modelling is essential – along the lines this project explored and developed. A valuable experience in the project was devising workflows and linkages between these advanced, but independent models.