On the coherent structures generated by circular jets in shallow water 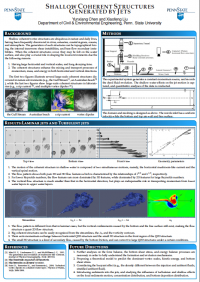 The coherent structures generated by jet are ubiquitous in shallow water bodies (coasts, lakes, estuaries, etc.), posing considerable influences on the local mixing and transport processes of mass, momentum, and energy due to their large spatial scales and long decaying time. They are very common geophysical flow phenomena which play an important role in earth surface dynamics. This work studies the generation and evolution mechanisms of such coherent structures based on numerical simulations using OpenFOAM. The results indicate that the shallowness effects dominate the main features of the shallow coherent structures. Specifically, the bottom and the free surface confines the initial 3D vortex structure to be a quasi-2D (Q2D) coherent structure which is characterized by S~t^(2/3) with S denoting the length, radius, or circulation of the vortex structure. However, the shallowness effect caused by the free surface is weaker than the bottom, resulting a vertical spiral motion accompanied by the quasi-2D structure. The spiral motion (vorticity) can be seen on the free surface, and its strength is influenced by the jet momentum and water depth. One the other hand, Reynolds numbers also show influences on the generation and the evolution process. For laminar jets, the generated flow structures show more 3D features at lower Reynolds numbers while become more Q2D at higher Reynolds numbers. For turbulent jets, the flow structures is similar to that of laminar cases. However, there exists small scale 3D turbulence caused by bottom friction in the front region of the coherent structure. Another difference is that the orientation of the coherent structures becomes more random in turbulent jet cases. In conclusion, the above results imply that both the shallowness effects and the bottom friction contribute to the vertical transport of the fluid mass and momentum, and the interactions with the horizontal coherent structure, thus providing a useful clue to understand the vertical mass and momentum exchange in shallow water layers. In the future, sediment particles will be added into the jet and their transport in shallow water will be studied.