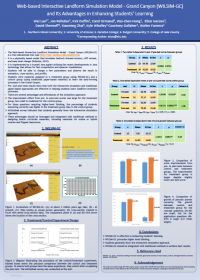 The Web-based Interactive Landform Simulation Model – Grand Canyon (WILSIM-GC, http://serc.carleton.edu/landform/) is an educational tool designed to help students better understand the long term past geologic processes that shaped the landform we observe today. It is a continuation and upgrade of the simpler cellular automata (CA) rule-based model (WILSIM-CA, http://www.niu.edu/landform/). Major improvements in WILSIM-GC include adopting a physically based model that simulates bedrock channel erosion, cliff retreat, and base level change and utilizing the recent developments in Java technology (e.g., Java OpenGL, Trusted Applet, and multithreaded capability) that allows for fast computation and dynamic visualization. Students will be able to change the erodibility of the bed rock, contrast in erodibility between hard and soft rock layers, cliff retreat rate, and base level dropping rate. The impact and interaction of these changes on the landform evolution can be observed in animation from different viewing geometry. In addition, cross-sections and profiles at different time intervals can be saved for further quantitative analysis, such as computing channel incision rate, upstream knickpoint migration speed, etc.

WILSIM-GC was tested in an introductory physical geography lab course. Students were randomly assigned to a treatment group (using WILSIM-GC) or a control group (using traditional paper-based material) to learn the land-forming processes in the Grand Canyon. Pre- and post-tests were administered to measure students’ understanding of the concepts and processes related to Grand Canyon formation and evolution. Results show that while both the interactive simulation and traditional paper-based approaches appeared to be effective in helping students learn landform evolution processes, there are several advantages and affordances of the simulation approach. The improvement effect from pre- to post-test scores was large for the treatment group, but small to moderate for the control group. In addition, for those questions requiring higher-level thinking, the percentage of students answering correctly was higher in the treatment group than in the control group. Furthermore, responses to the attitudinal survey indicate that students generally favor the interactive simulation approach. These advantages can be leveraged and integrated with traditional methods in designing better curricular materials, including materials for online or hybrid courses and flipped classrooms.