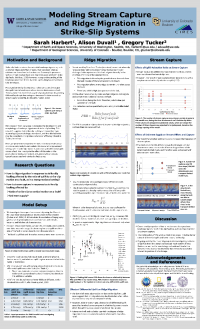 Rivers respond to tectonics and climate through both gradual and abrupt changes in slope, hydraulic geometry, and planform. At the fast end of the fluvial response spectrum is stream capture, a process by which drainage area, and therefore water and sediment, is rapidly diverted from one catchment into another. Stream capture modifies the topology of drainage networks and has implications for fluvial incision and deposition in sedimentary basins. Although stream capture is recognized as an important process in landscape evolution, the factors controlling its occurrence are not well understood. We use the Channel-Hillslope Integrated Landscape Development model (CHILD) to investigate the effects of stream size, sediment supply, drainage divide geometry, and rock uplift on stream capture. We model a scenario in which a strike-slip fault forces frequent stream captures by juxtaposing adjacent streams. In a simple scenario, stream captures should occur whenever two streams are juxtaposed, a frequency that depends on the drainage spacing and the fault slip rate. However, our models did not show such regularity. We found that river size and sediment supply both affect the likelihood of stream capture. In more than 90% of stream captures in our model runs, the capturing stream was larger (i.e. had more drainage area) than the captured stream. In model runs in which all of the streams were larger where they cross the fault, stream capture occurred almost twice as often. Finally, fewer stream captures happened when the fluvial system was detachment-limited; nearly twice as many stream captures occurred when fluvial sediment deposition was allowed in the system. Divide geometry also affected the occurrence of stream capture. We found that when the difference in elevations between the streams involved in a capture event is greater, the capture can occur from a greater horizontal distance. We interpret this relationship to mean that stream capture is “easier” when one stream is “perched” high above another. Finally, we test the role of differential uplift across a strike-slip fault by adding vertical motion to our models. These results indicate that stream capture is affected by many variables other than stream proximity. Comparing these results to field sites will help us to understand the prevalence of stream capture in real-world strike-slip systems and the resulting landscape signature of lateral faulting.