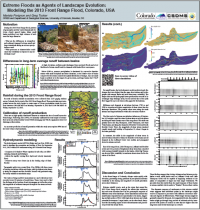 In September 2013, five days of near-continuous precipitation across the northern Front Range of Colorado caused widespread flooding and triggered numerous debris flows within mountain catchments. Quantitative observations suggest that the hydrologic conditions and patterns of geomorphic activity varied dramatically, even between closely spaced basins. While the largest watersheds experienced very high discharges, many of the smaller ones suffered more significant landscape change and mobilized very large volumes of sediment.

We explore the temporal and spatial patterns of geomorphic activity across the region to identify the characteristics that determine the response of any given catchment to an extreme precipitation event. Understanding the mechanisms that govern their behavior during these single, intense events, is necessary for deciphering the processes that direct the evolution of the whole landscape over centuries to millennia.

We propose that the differences in their behavior result from the position of the basins relative to the spatial distribution of snowmelt and summer thunderstorm activity, as well as the size of the catchments compared to the footprint of summer thunderstorms.

We focused our analysis on five major basins along the northern Front Range of Colorado. We characterized the typical drivers of landscape evolution across the region by determining the relative importance of climatic drivers for runoff generation in sub-basins of all sizes. To understand the impact that this large event had on the landscape, we compiled hourly rainfall data for the week of the 2013 storm across the state and reconstructed the spatial and temporal patterns of precipitation over this period. We compared these results to long-term averages of summer and winter precipitation to infer the relative importance of this rare event in the short-term evolution of the landscape. To quantify the effects of this event on channel morphology, we simulated the generation and routing of this flood in each of the five major basins by driving the ANUGA hydrodynamic model with the reconstructed precipitation patterns. By calibrating the model results against real-world measurements of discharge at stream gages, we obtained an estimate of rainfall losses to infiltration and other processes. Finally, we used the reconstructions of streamflow and flooding patterns to infer the magnitude of sediment transport that would have been possible during this flood. By simulating the behavior of flow across the region during a rare and extreme precipitation event, we are able to extrapolate observations of modern-day geomorphic activity into a long-term history of the evolution of the landscape.