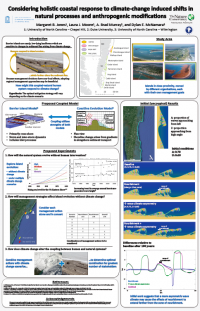 While climate change and relative sea level rise can accelerate shoreline change rates, human modifications to the shoreline also have the ability affect large-scale patterns of change. Furthermore, there is a coupling between the natural shoreline dynamics and human response: increasing rates of shoreline change are likely to result in human modifications designed to protect shoreline investments and habitats, and these modifications, in turn, affect shoreline dynamics. Because management decisions affect not only those who implement them, but also neighboring stakeholders up and down the coast, it is beneficial to explore holistic coastline response within the coupled natural-human system. Coastal modeling is a powerful tool to help us understand these dynamics. As such, we are working to couple two previously described shoreline change models with the goal of exploring holistic shoreline change to management scenarios and climate change along a series of barrier islands on the Virginia coast where several different stakeholders have potentially competing coastal management goals.

The Barrier Island Model (BIM) describes barrier island, inlet, and dune response to storms and sea level rise (McNamara and Werner 2008). However, BIM does not account for the ability of gradients in alongshore sediment flux to produce complex shoreline shapes under high angle wave climates. Because our Virginia coast case study includes a cape-like feature (Fishing Point at the southern end of Assateague Island), we intend to use the Coastline Evolution Model (CEM; Ashton and Murray 2006) to asses how this coastline may respond to different wave climate scenarios. By coupling these two models and representing the effects of human manipulations (e.g. a commitment to nourish a specific section of beach; the construction of a seawall) and climate change scenarios (e.g. an increase in relative sea level; a change in the proportion of hurricane-generated waves) we will be able to assess the effects of the coupled natural-human system on shoreline dynamics.